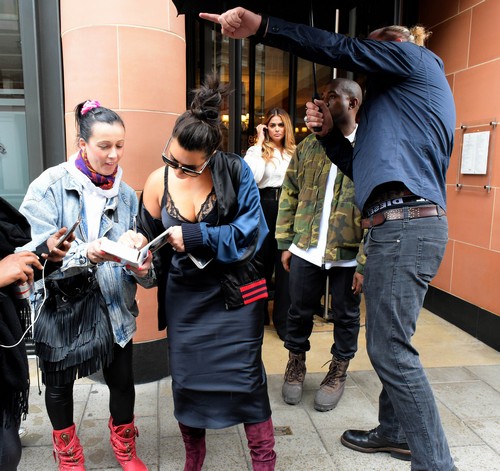 Poor Kim Kardashian is still hiding the baby weight she gained while pregnant with Saint West. New photos of Kim in London at C Restaurant enjoying lunch with Kanye West on Saturday, May 21 reveal Kim has not been able to get back to her pre-baby weight six months after giving birth.

Kim and Kanye are in London for the Vogue 100 Festival: Fashion, Friendship and Fabulous Lashes Event.

It can’t be easy on Kim because the ‘Keeping Up with the Kardashians’ star is constantly compared to Kendall Jenner and Kylie Jenner. Kendal and Kylie are hot, sexy and much younger than Kim and very much in demand.

It must be killing Kim Katdashian to watch Kendall and Kylie Jenner be chosen for one modeling job after another and appear on fashion magazine covers across the globe. Kim must feel like a plus-sized has been.

It’s obvious Kim Kardashian edits the naked selfies she post on social media before they’re shared with the world so it looks as if she’s returned to that pre-baby weight of 135 pounds. Kim hides the extra weight in public by wearing clothes in sizes much larger than Kim will admit.

Pretending to have lost all the weight she gained isn’t fair to women – young women especially – who think they should be able to get back their pre-baby weight bodies as easily as Kim Kardashian claims she has.

We’d be hard pressed to stick to a strict diet and exercise plan if we had to put up with Kanye West’s constant ranting and raving over whatever topic catches his attention on any given day. Who wouldn’t want to hunker down with a carton of ice cream after watching an embarrassing public rant from their husband?

Forget what Kanye West wants, is it really that important? Kanye is expected to act like a normal human being and he can’t manage to do that.

The reality television diva needs face reality and not the reality created on ‘Keeping Up with the Kardashians.’ Kim is a woman in her 30s who has given birth to two children. Kim is plump and petite and that’s life, it shouldn’t be a personal tragedy. Kim, embrace your body exactly the way it is. Stop worrying about that extra 20 or 30 pounds you can’t lose. Focus on being healthy and happy.

Kim should be thrilled she has two healthy children. Not to mention all that money and the huge mansion that took three years to remodel. Most people would kill to have what Kim Kardashian and Kanye West.

Kanye West and Kim Kardashian enjoy a lunch date at C restaurant in London, UK on May 21, 2016. The pair are in town for the Vogue 100 Festival: Fashion, Friendship and Fabulous Lashes Event.