BY Amanda Austin on May 14, 2016 | Comments: one comment
Related : Hot News, Keeping Up With The Kardashians, Kim Kardashian, Saint West, Weight Loss 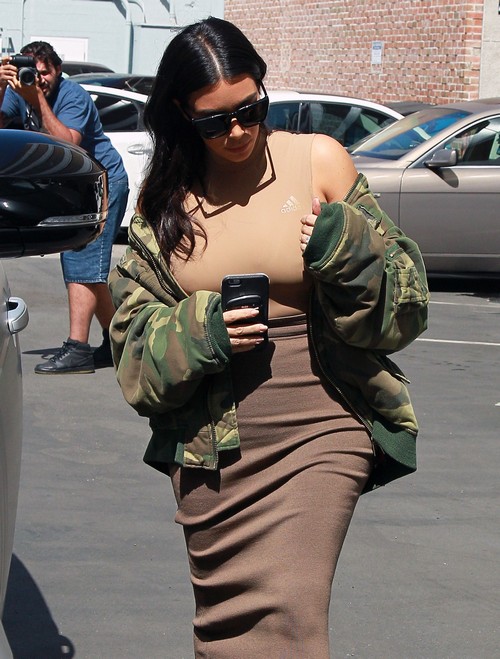 It has been 6 months since Kim Kardashian gave birth to her baby boy Saint West, but the Keeping Up With The Kardashian star doesn’t seem to be any closer to her post baby weight. Kim was spotted leaving Epione Skin Care in Beverly Hills, California on May 12, 2016, and despite the warm weather – she is still rocking coats three sizes too large to cover up her body.

Actually, it looks like she is wearing her husband Kanye West’s signature camo jacket – which is less than flattering on him, and her.

Since Kim Kardashian gave birth to Saint West, it’s no secret that she is struggling to diet and lose the baby weight. And, she has been seriously struggling. In her defense, if we had to deal with Kanye West on a regular basis, we would probably be hiding under the covers and binge-eating comfort food too. Surely, the stress of her marriage can’t be helping her keep on track with her diet and exercise.

Here’s our beef with Kim Kardashian. We’re all human, we all have kids, we all gain fifty pounds, and we all have a tough time getting our post baby bodies back. The part that is upsetting is that Kim Kardashian is constantly posting selfies, naked ones at that online, and clearly doing some creative editing to appear much smaller than she actually is in real life.

If she were being honest on social media, then she wouldn’t have to wear XXXXL coats to cover up her extra pounds when she steps out in public. It’s all fun and games now, what is she going to do when July or August hit and that sun is scorching?

What do you think of Kim Kardashian’s post baby bod? Is she being deceiving on social media about losing the baby weight? Will she ever get back to her post baby body? Let us know what you think in the comments below!

Kim Kardashian and Kanye West are seen out for lunch with their daughter North in Malibu, California on May 14, 2016. Kim Kardashian recently took to her Snapchat to announce that she’s reached her goal weight of 135 pounds after giving birth to her son, Saint West. Of course Kim stays well covered up…

Kim Kardashian is spotted at Epione Skin Care in Beverly Hills, California on May 12, 2016. It was recently announced that Kim will receive the first-ever ‘Break the Internet Award’ at the 2016 Webbys by FameFlynet