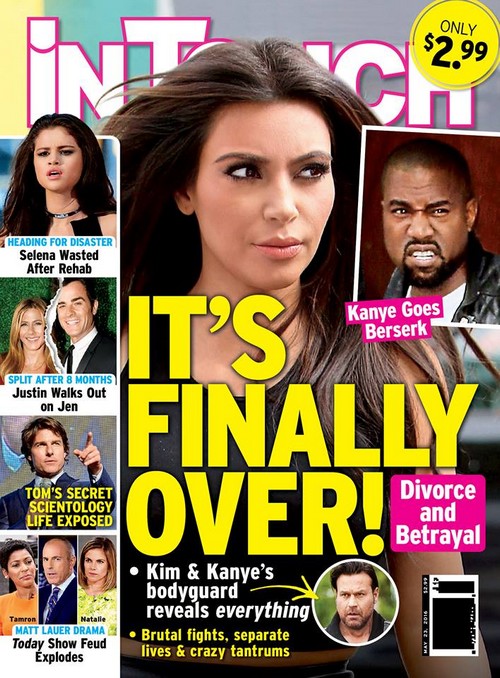 Will Kim Kardashian finally divorce Kanye West? It’s no secret that the Kimye household is not a happy home. But, according to this week’s cover of In Touch Magazine, Kim Kardashian has said ‘enough is enough’ and filed for divorce against her husband Kanye West.

The all new In Touch cover features a photo of a miserable looking Kim Kardashian, the headline screams, “It’s Finally Over! Divorce And Betrayal.” The cover goes on to tease that Kim and Kanye’s former bodyguard is telling all about their “brutal fights, separate lives, and crazy tantrums.” Also, Kanye apparently went “berserk” again – what else is new?

Is Kim and Kanye’s marriage really over? Well according to alleged inside sources, “Kim has consulted with divorce lawyers and is close to having papers drawn up.” This isn’t the first time Kim has met with lawyers, and it probably won’t be the last, but the odds of her actually going through with the messy legal process are probably pretty slim.

There is no doubt in our minds that Kim Kardashian and Kanye West are miserable. But, the Keeping Up With The Kardashians star also has a head for business. Kim knows that destroying the Kimye brand heading out solo would actually hurt her in the long run. And, let’s be honest – we all know about Kanye’s money problems, Kim won’t be getting a fat check.

Besides, the last thing Kim would want to do is admit that the “haters” have been right all along and her marriage is a mess. She’ll stick by Kanye through thick and thin just to prove a point, despite how unhappy she is.

What do you guys think? Will Kim Kardashian actually go through with the divorce? Or will she suck it up and deal with Kanye West and his insane behavior just because she doesn’t want to lose the Kimye brand? Share your thoughts and theories in the comments below!