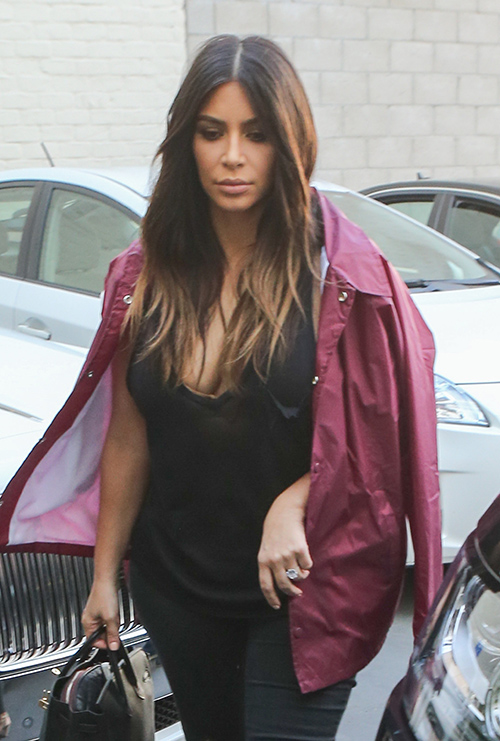 Kim Kardashian’s weight gain has gotten so out of control that the reality TV star is using a body double Kami Osman to film upcoming episodes of Keeping Up With The Kardashians. It’s no secret that Kanye’s wife Kim has been struggling with diets after the birth of her son, Saint, and has actually been packing on the pounds since his birth – not losing them.

Kim Kardashian has been photoshopping the hell out of her social media pictures since the birth of Saint West, moreso than usual. And, when she steps out in front of the paparazzi, she has been sporting very unstylish head to toe coats that are three sizes too large to try and cover up the extra pounds.

Despite Kim’s desperate attempts to keep her growing waistline underwraps, she was having a difficult time pulling it off while filming Keeping Up With The Kardashians. So, it looks like Kim has put a body double, Kami Osman, on her payroll to handle the full-body shots for her.

Look who I ran into the other day – @kimkardashian, we can’t wait for you guys to see our episode of #KUWK and see what we were up to xo Kim is such a sweet person and so so gorgeous, my god! -Kami A photo posted by Kamīlla Ōsman (@kamiosman) on Mar 21, 2016 at 10:48am PDT

Kim’s BFF Jonathan Cheban was recently spotted with what the press deduced was his new girlfriend – who also was a slimmed down dead ringer for Kim.

But, some nosey fans on the internet did some digging and came to the conclusion that the woman was not John’s girlfriend at all – but a fake Kim. Johnathan and Kim 2.0 were photographed leaving the Epione Cosmetic Laser Center in Beverly Hills.

A few moments later, Jonathan was photographed leaving the same place with skinny Kim who was Kami Osman. Here’s the kicker – the KUWTK camera crew weren’t following Kim Kardashian, they were following Jonathan and Kim 2.0.

Honestly, we can’t wait until this footage starts airing on Keeping Up With The Kardashians. We are seriously intrigued as to how they are going to edit the clips to make the faux Kim pass as the real one. What do you guys think?

Has Kim Kardashian hit a whole new level of ridiculousness? Share your thoughts in the comments below!