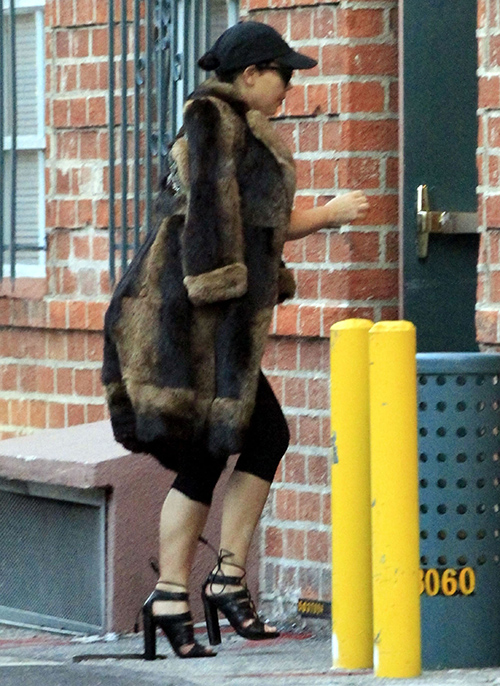 Kim Kardashian was seen heading into a dermatology clinic dressed like something you’d see at your local Walmart. The reality star snuck in the back door to get her face worked on, hoping to go unnoticed until she exited through the front.

Kim Kardashian hit up her dermatologist in Beverly Hills looking a little worse for the wear on February 1. She was apparently prepping her face for the upcoming selfie she and Amber Rose would later be posing for. She and Rose shared a cup of tea. Nothing like a gentle teatime with your nemesis, right? I think it’s safe to leave them in the frenemy category for now.

What girl doesn’t enjoy a facial or some kind of skin treatment to perk up your money maker when you’re feeling a bit drab in the middle of winter? Kim Kardashian was solo, perhaps because no one wanted to be seen in public with her dressed like that? Wearing a black baseball hat with her hair in a bun tucked underneath, black capri leggings, strappy black heels with laces tied up around her ankles, and topped off with a bulky fur coat and dark glasses, Kim was a hot mess on a mission. It’s safe to say that her mission was accomplished, as she headed out the front door, confidence restored, ready to take on her next mission: patching things up with Amber Rose.

Don’t you guys find it amusing that Kim Kardashian is so vain and generally cakes on the glam to be seen in the public eye, but then will make an appearance like this one, dressed like most of us wouldn’t even have the guts to do in public? Maybe she was sleep deprived being a new mom all over again that she didn’t take minute to look in the mirror before she stepped out of the house to see what she was even wearing?

In case you’re in need of some advice from Kim regarding your Valentine’s Day shopping, she is sharing her picks for gifts on her Twitter page for the guys and gals. So if you go with one of her suggestions, and your significant other doesn’t like the gift, you can blame it on Kim Kardashian.

What do you guys think about Kim’s funky wardrobe choice? Love it or hate it? Would you be caught dead dressed like that? Sound off in the comments below and be sure to check back here at CDL for all the latest on Kim Kardashian and her crazy family!