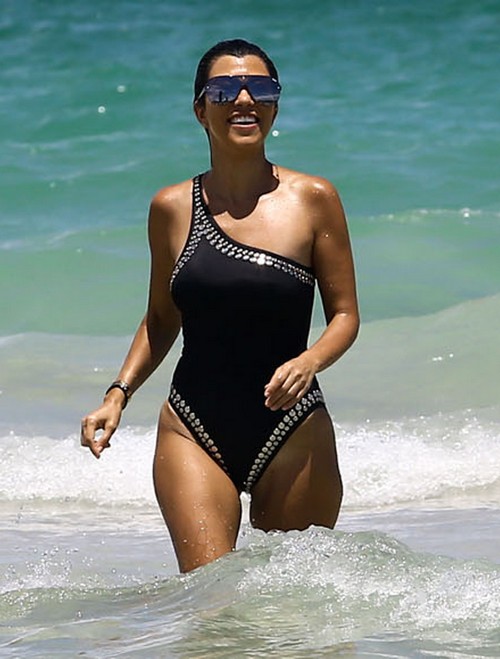 A new report has Kourtney Kardashian pregnant with Justin Bieber’s baby – and even worse, Kourtney is in crisis mode over this unexpected pregnancy! With three small children at home and an ex-partner and baby daddy who seems to come and go as he pleases, Kourtney Kardashian has so for managed to keep her personal life together, even when the rest of her family has been bogged by one scandalous event after another.

Yet, there’s new speculation that Kourtney Kardashian might be pregnant with her fourth child. The only problem is, no one knows who the baby daddy is as she’s been linked to two men in her life these two last weeks: her ex Scott Disick and her on-again, off-again boy toy of the moment, Justin Bieber.

With her sisters Kim and Khloe Kardashian along with her younger siblings Kendall and Kylie Jenner making headlines for their love lives, Kourtney has managed to slip in and out of nightclubs with very little worry. But her carefree days might come to an end, especially if she finds out that she’s carrying Justin’s first baby.

To complicate matters even more, Scott Disick has been crazy jealous over Kourtney moving on with someone like Justin as he’s only managed to date a small number of no-named models who are more likely after his fame than him.

“It’s heartbreaking for him to see Kourtney with Justin,” one source tells Life & Style Weekly, adding, “At first, everyone just assumed it was Scott’s since he’s been trying to make things work, but then out of the blue, she jets off to spend time with Justin. Her close friends and even her sisters aren’t sure anymore.”

And while Kourtney Kardashian wants the world to know that she’s got everything under control – she’s basically raising her three children with very little help from Scott – she’s supposedly in crisis mode behind closed doors over this unexpected pregnancy.

The insider further explained, “A paternity test is the only answer at this point, but it’s the last thing in the world she wants to do. This whole thing has her stressed out like you wouldn’t believe!”

If Kourtney Kardashian’s baby daddy turns out to be Justin Bieber, this will be the kind of story line that her mother Kris Jenner can only dream of. But it will definitely complicate her situation with Scott, especially if her heart keeps on telling her he’s the one, despite all of their issues. Plus, is Justin Bieber even ready to be a father right now? Let us know what you think in our comments section below.