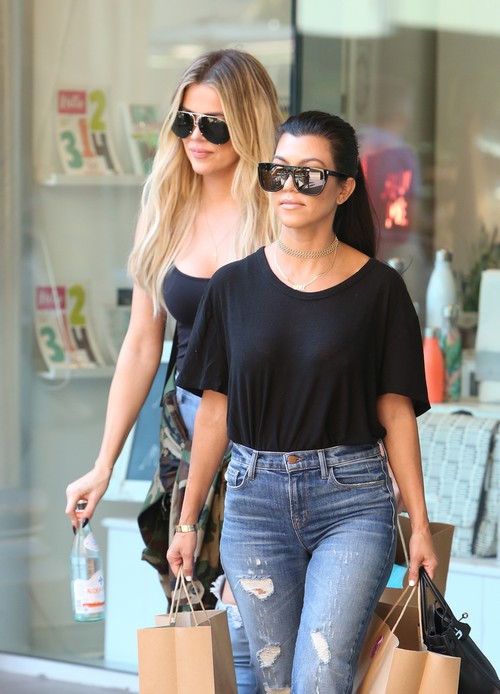 Kourtney Kardashian’s pregnant baby bump rumors are making headlines once again. The reality television star was spotted wearing a loose black top on a shopping trip with her sister Khloe Kardashian on Tuesday.

Kourtney Kardashian and Scott Disick’s brief reunion in the reality star’s rented Cape Cod house has fueled rumors of the ex-couple hooking up again and Kourtney getting pregnant as she tends to.

Kourtney Kardashian and Scott Disick’s on-again, off-again relationship has lasted for years with new speculation that they might rekindled their romance again. After all, the reality television stars share three children together, Mason, 6, Penelope, 3, and 1-year-old Reign and now that there are rumors of another Kourtney Kardashian pregnancy, Scott Disick might have even one more reason to stay by his ex’s side.

Kourtney Kardashian and Khloe Kardashian were spotted by the paparazzi on a shopping trip in Encino, California together. Realizing that photographers were apparently following them, Kim Kardashian’s sisters took a ride on a merry-go-round despite carrying two bags full of purchases with them.

Clearly, Kourtney Kardashian is making no effort in hiding her rumored baby bump or even denying the pregnancy allegations to the media for that matter, either.

It wouldn’t be surprising if Kourtney Kardashian’s pregnancy announcement came before the end of the year. After all, unlike her sisters Kim Kardashian and Khloe Kardashian, the mother-of-three has made it no secret that she enjoys being a hands-on mother who would rather stay home with her children than pose on another red carpet or do the publicity rounds with her reality television family.

Unlike Kim Kardashian, Kourtney Kardashian would rather raise her children her own way than leaving everything up to their nannies.

Considering that Kourtney Kardashian has been spotted with Scott Disick on multiple occasions this summer, there’s a good chance that he might be the father of the ‘Keeping Up With The Kardashian’ star’s fourth child.

Take a look at our photo gallery below and tell us, do you think a Kourtney Kardashian pregnancy announcement will be made soon? Is Kourtney Kardashian hiding a baby bump underneath her black top? Let us know what you think and of course check back with CDL for all the latest updates on the Kardashians and all of your favorite celebrities right here.

Kourtney Kardashian and Khloe Kardashian go shopping at the mall in Encino, California on August 23, 2016. The two had bags full of purchases, but before leaving took a ride on the merry go round. FameFlynet