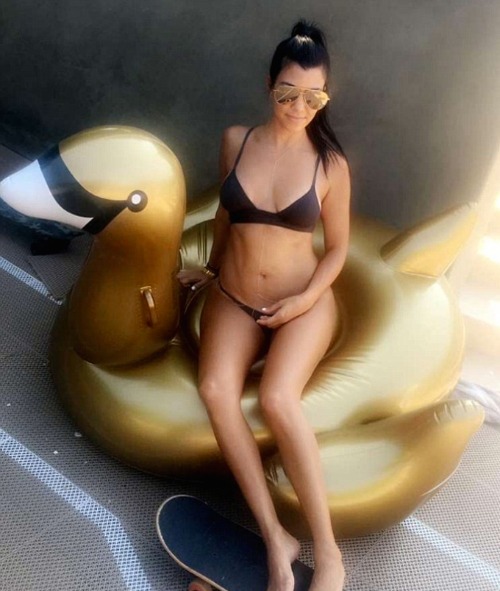 Kourtney Kardashian and Scott Disick’s relationship has definitely had it’s fair share of ups and downs throughout the years, but the ex-couple has managed to remain amicable for the sake of their three children, Mason, 6, Penelope, 4, and Reign, 1. Although Kourtney Kardashian and Scott Disick are no longer together, the former pair did spend their summer with their family at a rented mansion in Cape Cod for several weeks.

There’s a chance that Kourtney Kardashian might have rekindled her relationship with Scott Disick if not briefly, which might be the result of the rumored pregnancy. In fact, according to In Touch Weekly, Kourtney Kardashian’s baby bump was quite prominent in a new Instagram photo of the reality television star sitting on an inflatable swan poolside.

What’s more, even though Kourtney Kardashian and Justin Bieber rumors have popped up in headlines and Scott Disick has been connected to a number of models, both haven’t dated anyone seriously since their ultimate break up last year.

So far Kourtney Kardashian hasn’t made any comments about the baby bump rumors. But knowing how much the ‘Keeping Up With The Kardashians’ star loves being a stay-at-home mother to her three children, there’s no doubt that she would be open to a fourth pregnancy. The only problem of course is if Scott Disick is willing to participate as a parent, otherwise Kourtney Kardashian will have no choice but to raise the child on her own as a single mother.

But then again, Kourtney Kardashian’s baby bump might also be just another ‘food baby’ after a long day of grilling and snacking poolside with her friends and family. But considering how quiet Kourtney Kardashian has been about the rumors, there’s a possibility that she might have something cooking in her oven after all.

Tell us CDL readers, do you think Kourtney Kardashian is pregnant? Is Scott Disick the father? Let us know your thoughts in the comments section.