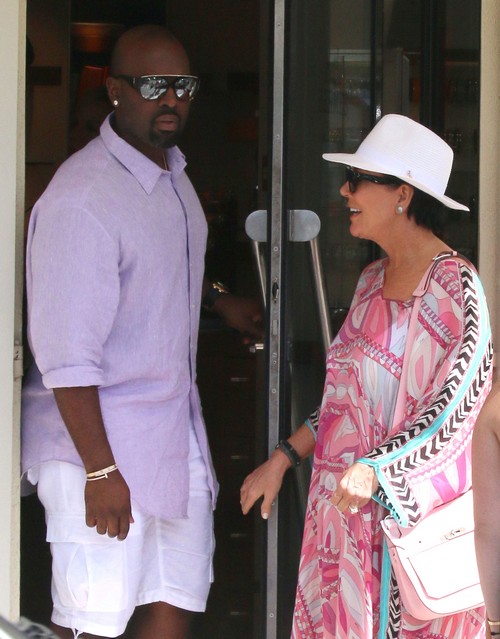 Are Kris Jenner and Corey Gamble are faking their relationship while Kris pays him to pretend they are dating? Kris Jenner was humiliated by Bruce Jenner transitioning into Caitlyn Jenner, so she hired Corey Gamble to ‘be her boyfriend’?

According to the latest issue of Star magazine, Kris Jenner’s relationship is as genuine as her face. The report points out some great facts that anyone would have a difficult time arguing. For a family like the Kardashians, who spend all their time in the spotlight (by choice) and who live on social media 24/7, Kris Jenner has only posted one photo of herself with her alleged boyfriend, Corey Gamble on her page.

They have also been captured in only a single photo sharing a kiss. Could that be the only kiss that they’ve ever shared? The magazine also pointed out that Corey failed to give Kris a birthday gift in November when she threw herself a huge party, but they also point out that she didn’t breakup with him over his shortcoming either.

A source close to the Kardashian family told Star, “Once Bruce Jenner began his transformation into Caitlyn and was getting so much attention, it was particularly humiliating for Kris. She handpicked Corey so she wouldn’t look lonely.”

Could all of this simply mean that Kris Jenner has Corey Gamble on her payroll? Could he be her stand-in boy toy to make her feel like she’s young and desirable? Did she handpick a younger guy like Corey because someone her own age might not be so willing to stoop to her level to fake a relationship for money?

Can we really put anything past the momager who will seemingly stop at nothing to keep the Kardashian empire alive and well. Kris Jenner has pulled some crazy rabbits out of her hat, why not pay someone to pose as your boyfriend?

What do you guys make of all this? We can’t really put any of this past Kris Jenner, can we? Do you think that Kim, Khloe, Kourtney, Kendall, Kylie, or even Rob support whatever she’s got going on with Corey Gamble? Or will they just play dumb when the truth comes out? Sound off in the comments below and be sure to check back here at CDL for all the latest Kardashian news!