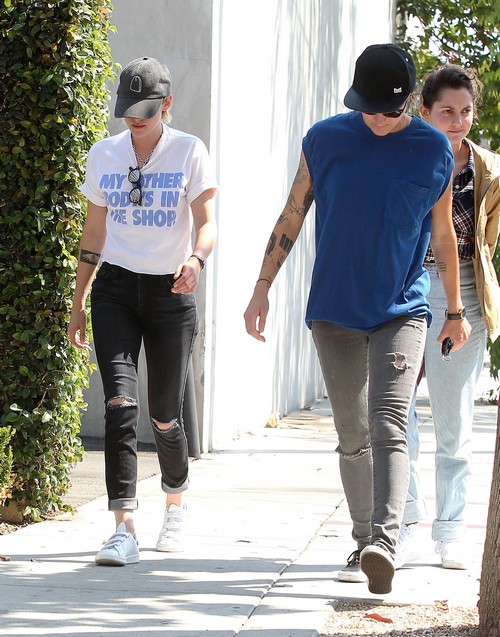 Kristen Stewart and Alicia Cargile’s relationship might be on thin ice and the hot couple might be fighting according to recent photos of the couple. The Hollywood actress and her girlfriend were spotted keeping their distance from one another while out and about in West Hollywood this week.

Kristen Stewart has made it no secret that she isn’t a fan of the paparazzi or the media for that matter, either. In fact, Kristen Stewart has even blamed her Robert Pattinson break up on the tabloid media, hinting that her relationship with her ‘Twilight’ co-star wasn’t always picture-perfect.

In fact in one recent interview, Kristen Stewart called her Robert Pattinson relationship “gross” explaining, “I It’s not that I want to hide who I am or hide anything I’m doing in my life. It’s that I don’t want to become a part of a story for entertainment value.”

Sure, Kristen Stewart’s “gross” comments about her Robert Pattinson romance might be taken out of context, but knowing how much the media loves to scrutinize every word she says, the actress doesn’t seem to be too worried about how she might be putting her ex-boyfriend in a bad light.

Robert Pattinson on the other hand has stayed relatively quiet to the press about Kristen Stewart after their break up, giving Alicia Cargile another reason to be concerned about her girlfriend. There’s no doubt that Alicia Cargile is none too pleased with Kristen Stewart talking about her ex-boyfriend Robert Pattinson even though so much time has passed since their break-up.

Take a look at our photo gallery below of Kristen Stewart and Alicia Cargile and tell us, do you think there’s trouble in paradise for this couple? Drop us a line with your thoughts in our comments section below and check back with CDL for all the latest updates on Kristen Stewart and your favorite celebs right here.

Shy actress Kristen Stewart and girlfriend Alicia Cargile are spotted out and about with a friend in West Hollywood, California on August 23, 2016. Kristen had her hat pulled down to hide her face and was wearing a t-shirt that read ‘My Other Body Is In The Shop’. FameFlynet