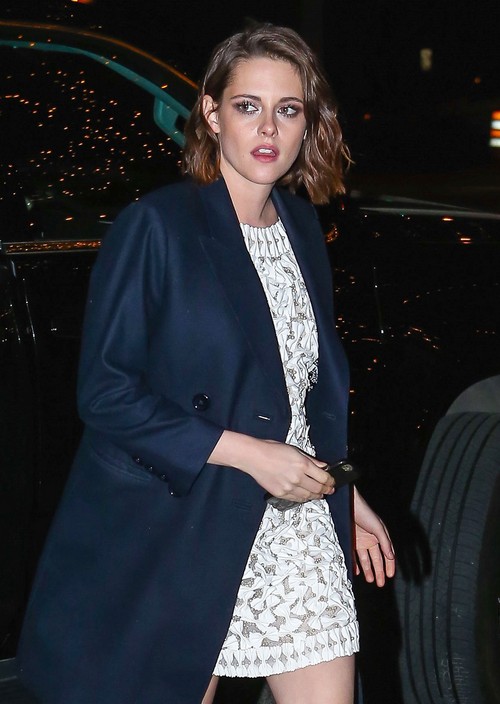 Kristen Stewart may not have stayed single for long after talk of a New York City hook up with Nicholas Hoult. Stewart and Hoult were in the city on January 5 for the 2015 National Board of Review Gala. After the event, Kristen and Nicholas were seen getting drinks at the Bowery Hotel.

It is suspected that Stewart and Hoult may have headed back to their shared hotel room afterward.

Kristen Stewart isn’t really known for smiling. As a matter of fact, the Twilight star gets teased for the narrow range of emotion she shows. So technically, KStew was beaming during her night out with Nicholas Hoult in New York City. There has been a lot of speculation about whether or not the Equal stars are dating.

Kristen and Nicholas just finished up filming the futuristic love story. Much of the camera work was shot in Japan, where Stewart and Hoult spent months together as they bonded and worked on the movie. Is it possible that Hoult is the reason for Kristen Stewart’s break-up with Alicia Cargile?

Kristen doesn’t look like she misses her ex-girlfriend/personal assistant at all as she tries to look bashful while hanging with her new beau.

Kristen and Nicholas didn’t make it a secret that they were at the hotel bar together but they were careful not to get touchy feely. The co-stars were acting with the utmost manners as they flirted and chatted but avoided touching each other. It must have been fun to pretend not to know each other, only to slip away to a secretly shared hotel room later.

Kristen may think she’s got everyone fooled but she can’t hide anything because her face gives it away. If Kristen Stewart and Nicholas Hoult don’t come out as a serious couple soon, it will be really surprising.

Right now it seems like Kristen is only holding back out of respect for Alicia Cargile and an apparent recent attempt to reconcile. Nicholas Hoult seems more suitable for Stewart, who is determined to prove that she will star in movies whether she has the acting chops or not.