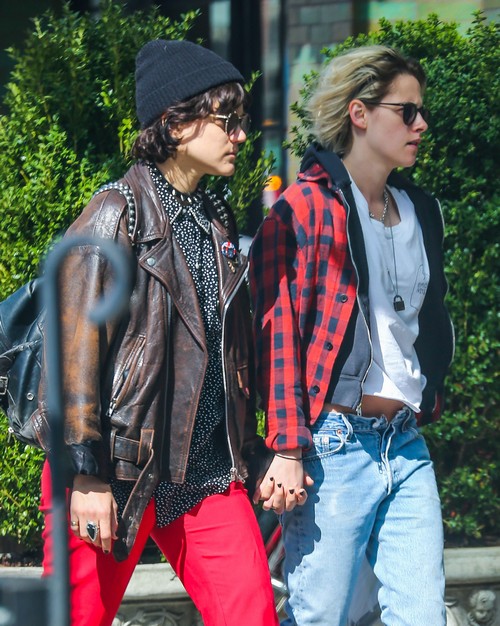 Despite her busy schedule, Kristen Stewart has just found the right amount of time to engage in another public date with current girlfriend SoKo – this time with her jeans open. Photos of the twosome’s rendezvous, which may have gone too far in terms of PDA, found their way to the Internet.

Earlier today, Kristen Stewart and her French singer girlfriend Soko were spotted strolling hand in hand in New York City. Though the lovers appeared to be casually walking along the street, one photo showed an interesting bit — KStew’s blue jeans were unbuttoned.

Robert Pattinson’s ex-girlfriend obviously does not have a big tummy. In fact, her toned physique would strongly suggest that she would fit snugly in them. And unless she was just trying to imbue her rugged fashion sense, we would say that something hot and naughty could have happened prior their stroll, and Kristen is just proud of it.

Well, this could not be surprising at all. The lovers are really inseparable nowadays. On Sunday, the 25-year-old “Twilight” actress was also seen with her 30-year-old girlfriend at LAX. Daily Mail reported that KStew and SoKo were catching their late night flight to the Big Apple that time.

Stewart and SoKo were casually dressed as they held each other’s hand and made their way to their flight. Aside from their PDA however, KStew instantly made headlines for debuting her platinum blonde do.

The Twilight actress is naturally brunette, and prior to her new hairdo, she rocked bright orange tresses for “American Ultra.”

Meanwhile, it seems that RPatz’s fiancée FKA Twigs can put aside her jealousy with KStew since the latter is clearly smitten with SoKo. But we just can’t say the same for Stewart’s previous lesbian romance partner, Alicia Cargile.

We previously dished that the “Twilight” star was getting serious with her assistant-turned-girlfriend that she even moved in with her, got matching inks, and even considered a low-key wedding. But now things have changed, and Alicia Cargile is left mad and bitter over KStew’s newfound romance.