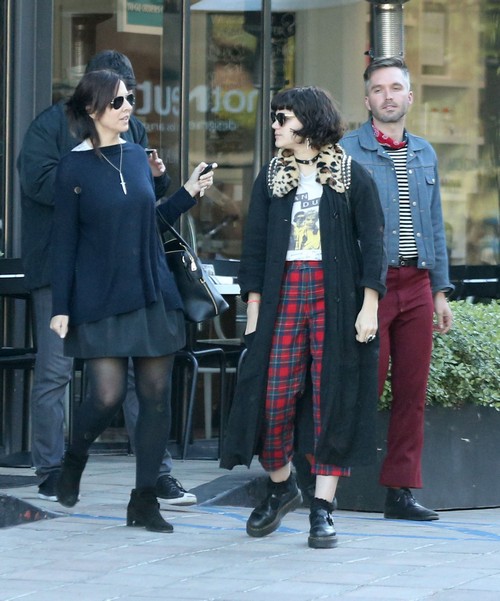 SoKo dated Robert Pattinson before Kristen Stewart! Kristen Stewart insists that she wants to put her relationship with Twilight hunk Robert Pattinson behind her – but dating his sloppy seconds definitely is NOT the way to go about it. This year K-Stew and live-in girlfriend Alicia Cargile broke up and went their separate ways, and it wasn’t long before Kristen found her self a new girlfriend, French singer SoKo.

Kristen Stewart and SoKo actually have a lot in common – including their mutual ex Robert Pattinson. Say it ain’t so! SoKo revealed in an interview with a music blog that was unearthed online by diehard Twilight fans that she actually dated (and who knows what else) Robert Pattinson when she first moved to Los Angeles.

Awkward! We can’t help but wonder if this is how Kristen met SoKo, or if she was totally unaware of the fact that they both have romantic histories with R-Patz.

SoKo dished to ‘A Music Blog, Yea?’ in 2015 about when she arrived in LA, “Three nights in, I went out and met a girl who was like ‘Hey, I like your music, I work for a label and we would love to sign you. Where are you staying, do you need a place to stay?’ and I was like ‘Yeah I do’ That same night I had a blind date with Robert Pattinson!”

SoKo doesn’t go in to much more detail about her date with Robert Pattinson, she just casually drops his name and then carries on as if nothing happened. But the fact that she felt comfortable even mentioning the blind date means she must have gotten to know him pretty well during that time.

So, that leads us to the question – did Kristen Stewart actually meet SoKo through Robert Pattinson? Did she just steal her ex-boyfriend’s ex-girlfriend, or is it just a total coincidence? Let us know what you think in the comments below!

Kristen Stewart’s new girlfriend Soko spotted out for lunch at Cafe Gratitude in Los Angeles, California on March 22, 2016. Kristen was not out with the group despite the pair arriving in Los Angeles a few days ago after being caught kissing while in Paris by FameFlynet