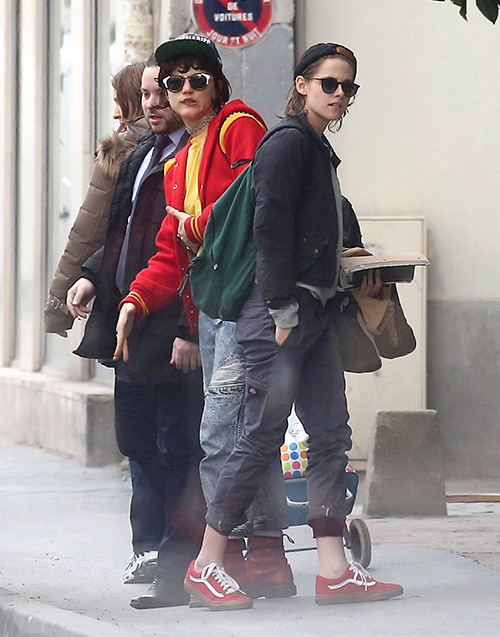 Despite the fact that Kristen Stewart and Robert Pattinson have been split for some time, it seems it’s not just the public that can’t forget the K-Stew pairing – it may also be Kristen herself. She was upset when she was caught cheating with Rupert Sanders and got dumped, but has Kristen now moved from missing Rob Pattinson to mocking him?

Kristen Stewart has been making tabloid headlines with her international love affair with singer SoKo. On the surface, it seems like just another K-Stew lesbian romance, but this one may have been designed specifically to irritate Robert Pattinson and fiancée FKA Twigs.

Consider this – Kristin’s last relationship was with her former assistant Alicia Cargile but that one seemed like a casual fling that she kept on the down-low as much as possible. But is Kristen rubbing it in Rob’s face that she lost interest in men after their split and now prefers women?

We have to wonder if Kristen made a deliberate choice with new girlfriend SoKo (French actress and singer Stephanie Sokolinski) and whether it was intended to antagonize Rob. Is Kristen mocking Robert Pattinson and FKA Twigs by choosing SoKo as her newest love interest?

Think about it. Rob is dating a quirky British singer – K-Stew is dating a quirky French singer. Both SoKo and FKA Twigs are budding fashionistas with very individual styles while Rob and Kristen tend to be shlubby in their clothing choices.

Has Kristen Stewart set herself up in a mirror image love affair to catch Rob’s eye again? Or is it perhaps to show FKA Twigs that she and R-Patz are nothing special? Or maybe this is a symptom of Kristen’s inability to move past her relationship with Rob?

No matter what is motivating Kristen, it seems very strange that she chose someone much like Rob’s fiancée to get involved with – and is making sure there’s lots of PDA to draw headline-making attention. K-Stew and SoKo have been spotted holding hands while traveling and cuddling in public.

If Kristen didn’t want the paparazzi attention, she could drop the hand holding and it would just look like two gal pals hanging out. But no, K-Stew is very deliberately – and provocatively – drawing attention to her new romance – and she has to know Rob and FKA Twigs will see the news.

So what do you think? Is it just coincidence that Kristen chose a woman similar to Rob’s lady love? Is K-Stew mocking R-Patz? Trying to get his attention? Or just trying to irritate Rob’s fiancée FKA Twigs? Is there a chance for true love between SoKo and K-Stew or is this a revenge blitz on her ex?

Share your comments below and come back to CDL often for more juicy news and gossip.