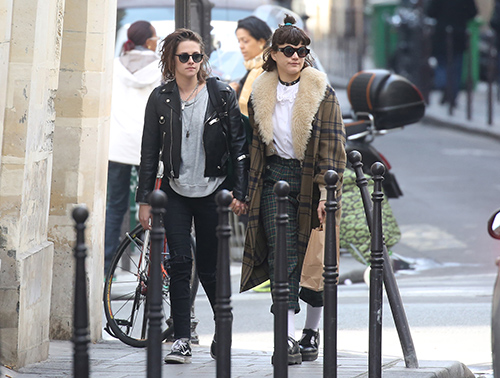 Is Alicia Cargile jealous and bitter over Kristen Stewart’s hot relationship with SoKo? Kristen Stewart nearly broke the internet this week when she stepped out in Paris, France with her new girlfriend SoKo (Stephanie Sokolinski) – paparazzi snapped photos of K-Stew and the new lady in her life enjoying the sights in the city of love, and of course kissing. Kristen’s fans were thrilled that she seemed so happy and in love and FKA Twigs was thrilled because she could stop worrying about her future husband and his ex. Basically everyone is over the moon for the “Twilight” star … except for Alicia Cargile.

Alicia Cargile is devastated that Kristen Stewart really is moving on, and it looks like she and K-Stew’s relationship is over for good now. The couple had a long run, and they even lived together, and were thought to be engaged and getting married – but obviously there isn’t going to be a wedding. It’s nearly impossible to keep up with Alicia Cargile and Kristen Stewart’s break-ups and make-ups, and honestly we had just stopped trying, because they always wound up getting back together. This time that doesn’t seem to be the case though.

Alicia Cargile was basically Kristen Stewart’s mother, maid, personal assistant, roommate, and girlfriend all wrapped into one. It’s no wonder Kristen Stewart went to Paris to make out with SoKo – the girl needed some space! Regardless, Alicia feels betrayed and is livid with Kristen Stewart, and after she dedicated the last few years of her life to Kristen’s life – we kind of get where she is coming from.

A pal close to Alicia dished to CDL, “Alicia literally made her entire world revolve around Kristen. She has nothing going for her, no jobs, no place to live, no social life, she put all of her eggs in one basket and when Kristen left her – she lost everything. She devoted her entire existence to cleaning for Kristen, planning her schedule, running lines with her, answering her phone, etc.”

No wonder Alicia is so bitter! Kristen is already moving on with SoKo, and Alicia doesn’t even have a reason to get out bed in the morning. Are you guys Tea Kristen or Team Alicica? Do you think Alicia is being a bit melodramatic? Share your thoughts in the comments below!