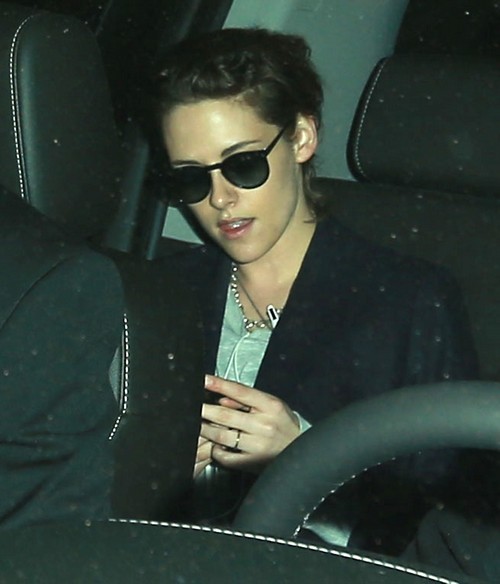 Is this the first truly public acknowledgement from Kristen Stewart that Alicia Cargile has been more than a BFF and personal assistant all along? In the most recent issue of OK! you will find the photo of Stewart wearing the gold band and a suggestion that she is married to Alicia Cargile. There has been buzz for months that Cargile and Kristen have always been more than friends– K-Stew’s mom basically admitted it in an interview.

Alicia and Kristen allegedly have been repeatedly warned to hide the fact that they are more than besties. Would the revelation that K-Stew is involved with a woman derail the actress’s career? Does anyone care if Kristen prefers women to men?

If Kristen’s career is derailed it’s because K-Stew really isn’t all that talented. Oh, and the comments that the “Twilight” series was the worst thing that ever happened to her were probably enough for most of Hollywood to say thanks, but no thanks when it comes to working with the actress.

There were a few whispers that Kristen Stewart and Alicia Cargile were having relationship problems and may have split when K-Stew left for Paris to film “Personal Shopper.” Apparently Alicia didn’t tag along on that film shoot – even though Paris is the most romantic city in the world.

Insiders divulged that Kristen and Alicia were not, and are not, having any problems. Said the source, “[Kristen and Alicia] are doing better than ever. They spent the holidays together to make up for lost time.” Did Kristen and Alicia spend time a whole lot of time together during the Christmas and New Year’s holiday because they snuck off and got married and were on a romantic honeymoon?

Was it a secret Christmas wedding for K-Stew’s finger? Kristen Stewart doesn’t seem the type to wear a ring for no reason. The ring Stewart is wearing is nothing fancy – but it could definitely be a wedding band. Wonder if Alicia Cargile’s has the more blinged out ring?

Is Kristen’s wedding band an apology to Alicia for sleeping with Nicholas Hoult? Let us know what you think in the comments section below and come back to CDL for the latest celebrity news.

Kristen Stewart wearing what looks like a gold wedding band on her left ring finder – January 20, 2016 by FameFlynet