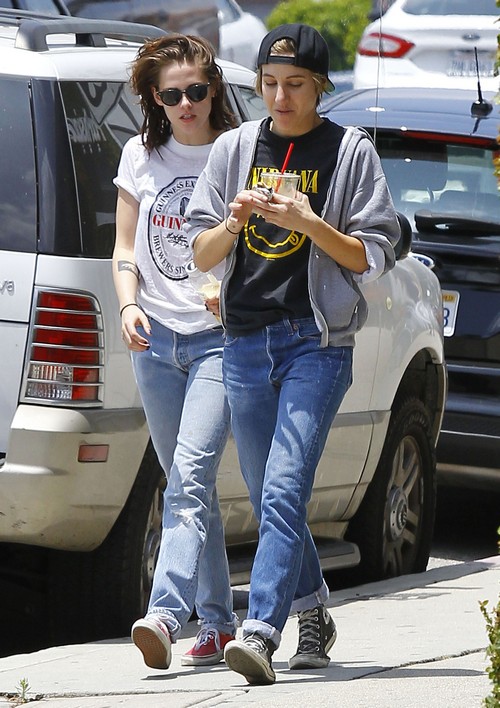 Did Kristen Stewart and Alicia Cargile split? New rumors surrounding the ‘Twilight’ star and her assistant turned girlfriend suggest they have broken up, and Stewart and Cargile’s secret marriage never happened and never will.

Kristen is notorious maintaining a persona of wanting privacy, while in reality using her relationships to benefit her career. Stewart’s entire relationship with Robert Pattinson was a showmance the packed theaters full of ‘Twihards’ emptying their wallets for the franchise. Then, Kristen Stewart had an affair with ‘Snow White and the Huntsman’ director, Rupert Sanders, clearly putting on a show for looming paparazzi. Seriously…these two don’t have $50 to shack up in a Motel 6 like normal cheaters?

Kristen Stewart and Alicia Cargile have never publicly confirmed her relationship with Alicia Cargile, but it’s clear she isn’t shy in showing off her post-Pattinson lesbian love for the cameras. Kristen and Alicia are often caught kissing, holding hands, cuddling, and enjoying PDA during every vacation or meal at a celebrity hotspot. When OK! ran a story that Kristen and Alicia were “secretly married” it sounded like another ploy. The media outlet claimed one of their spies overheard Stewart say, “I miss my wife,” and immediately assumed Kristen had married Alicia.

However, there is no marriage license for Kristen Stewart, which means KStew is not legally married. And, it appears there might never be a wedding despite the couple’s rumored race to the alter in competing with Robert Pattinson and FKA Twigs engagement; which also happens to have been put on hold.

French media claims Kristen has put the brakes on her relationship with Alicia and split, noting the couple hasn’t been spotted together in weeks. Of course, that doesn’t mean it’s over, but it doesn’t bode well for those pesky Kristen Stewart and Alicia Cargile wedding rumors.

What do you think? Did Kristen Stewart and Alicia Cargile really split? Will Kristen and Alicia ever get married? Let us know your thoughts in the comment section below.