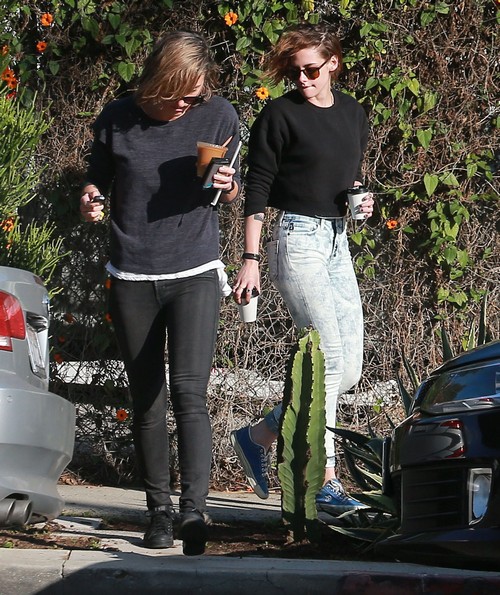 Kristen Stewart was recently spotted checking out some butt while curbing her caffeine craving at Fix in Los Feliz, California, with girlfriend, Alicia Cargile. While she may have been in the mood for coffee, Kristen Stewart apparently wasn’t in the mood to be photographed. Kristen flipped the bird to the camera as she headed inside. However, that didn’t stop paparazzi from snapping a few pics of KStew checking out her girlfriend’s butt. The “Twilight” and “Still Alice” actress couldn’t seem to keep her eyes off Alicia Cargile’s rear end as they lingered outside the Cali hot spot. Photographers got quite a few close-ups of her staring at it as they made their way to the car.

Kristen and Alicia have been friends for many years and it seems their friendship has blossomed into something more – like a lesbian love affair. The two have been seen getting cozy several times and they’re even rumored to be house hunting together. While Kristen doesn’t talk much about her relationship, many people are wondering if and when she’ll take it public. It’s possible that Alicia could be her plus one at the 2015 Oscar’s ceremony, but for now the two seem content to keep things sort of under wraps.

Since Kristen obviously doesn’t appreciate paparazzi in her face, she may be stalling on making any sweeping declarations of love for Alicia. Confirmation would undoubtedly draw more unwanted attention for the young starlet and her girlfriend.

Still, the pictures show they seem to be happy—well, at least as happy as Kristen can look in pictures. Time will tell if their relationship is built to last, but if the current photos are any indication, things seem to be moving in the right direction. We’ll be on the lookout for more info on the couple and let you know if they start getting serious.

What do you think about Kristen and Alicia’s recent coffee outing? Is it just a matter of time until we get an official announcement on their relationship? What about Kristen’s bird flipping and butt checking? Is she just being herself regardless of who’s watching? Let us know what you think in the comments below and don’t forget to check CDL often for all the latest entertainment gossip.