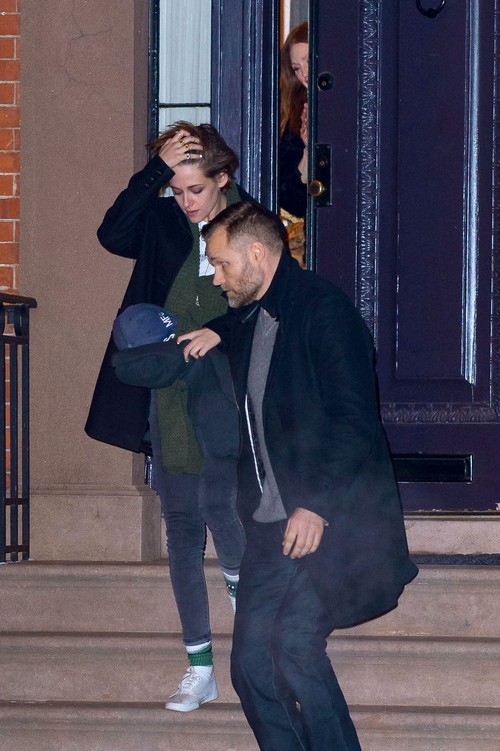 Kristen Stewart was spotted visiting her Still Alice co-star Julianne Moore at her condo in NYC, probably to celebrate the Oscar nominations. Although Kristen didn’t get an Oscar nomination for her performance in the movie, Julianne Moore netted a nomination for Best Actress and will probably end up winning. Of course, Kristen and Julianne are friends and co-workers, as they’ve mentioned in the past, so it makes sense that Kristen would be visiting her in her condo to celebrate.

The real question is – did Kristen Stewart bring her girlfriend Alicia Cargile to ‘officially’ announce her new dating romance to her BFF co-star? After all, if Julianne Moore and Kristen Stewart are so close, one would assume that they would also talk about their romantic lives, relationships, and who they’re dating.

In fact, we know that Kristen did NOT bring Alicia Cargile to the condo, since the photographers most definitely would have captured that. However, it’s much more likely that Kristen and Julianne have discussed Kristen Stewart’s dating and relationship with Alicia Cargile, especially since it will affect her career in Hollywood. As a mentor to Kristen, Julianne would have undoubtedly advised Kristen what to do, and I’m sure her advice was much more along the lines of following her heart. Kristen’s team, on the other hand, i probably freaking out about all the PR that her romantic life is netting, even though they really shouldn’t care. Kristen officially coming out with Alicia is helping her PR in the long-term, since the tabloids have finally stopped talking about her and Robert Pattinson. Plus, Kristen being bisexual or lesbian will gain her a whole different group of fans, and honestly, it just makes her seem cooler and more laid-back than she’s seemed in a while.

The only thing is that Hollywood, even though it pretends that it’s not, is still very homophobic on a very rooted level – even if that’s changing slowly over time. Kristen is considered leading actress material – but will that stay the same after her relationship with Alicia Cargile gets splashed all over the webloids and tabloids? Remember, many of the people reading these tabloids are from part of a culture that still doesn’t accept gay people – primarily in the mid-west and south, where tabloids sell the most number of copies.