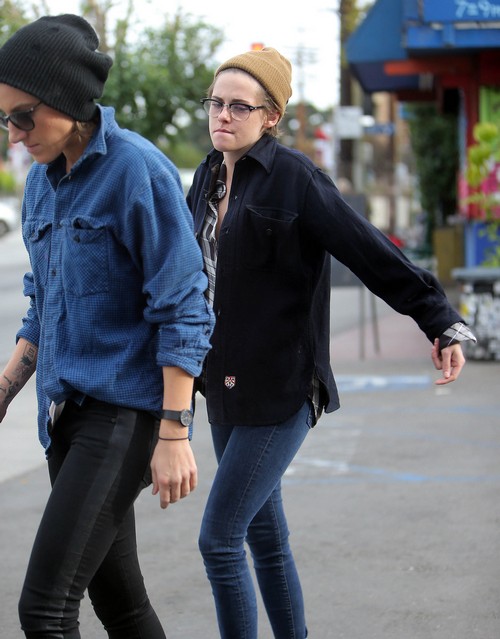 It’s always been difficult to believe that Kristen Stewart has been single for two years, especially since Robert Pattinson has moved on so publicly. However, it seems like people were jumping the gun when they dismissed Kristen Stewart’s friendship with ‘BFF’ Alicia Cargile without a second glance. As photos clearly show, Kristen Stewart is bisexual and currently in a hot lesbian relationship dating Alicia Cargile.

A source tells Radar Online that Kristen has been dating Alicia Cargile for a while now, with a source adding, “They are inseparable and mimic each other’s everything.” They reportedly have the same tattoos – arrows pointing in the same direction – on their right arm, and they spend all their time together. In fact, the two have been photographed getting extremely close and intimate in Hawaii during their vacation, and it’s hard to dismiss their relationship as a simple friendship after that.

Plus, Kristen Stewart dating Alicia Cargile would explain why she flew off the handle at the airport the other day when a fan asked her if she was still in love with Robert Pattinson. Whether she was or wasn’t, she wouldn’t have wanted Alicia to see that, right?

It also explains why Kristen has remained single for 2+ years, and why she didn’t even attempt to find a rebound relationship or hookup. She was dating her best friend, and the public just naively assumed that the two couldn’t date because Kristen Stewart wasn’t a ‘lesbian’.

Well, instead of putting labels on sexuality and labeling Kristen a lesbian or bisexual, let’s just praise her for keeping her relationship status and dating life on the lockdown – it’s something her ex-boyfriend, Robert Pattinson, desperately needs to learn. He’s constantly putting his relationship with FKA Twigs on display, grabbing her butt in public, holding her hands, and being very cuddly and PDA friendly.

What do you guys think? Is Kristen Stewart dating Alicia Cargile? Or is everybody jumping the gun and calling it a night [or not, depending on what you think]? Let us know your thoughts in the comments below.