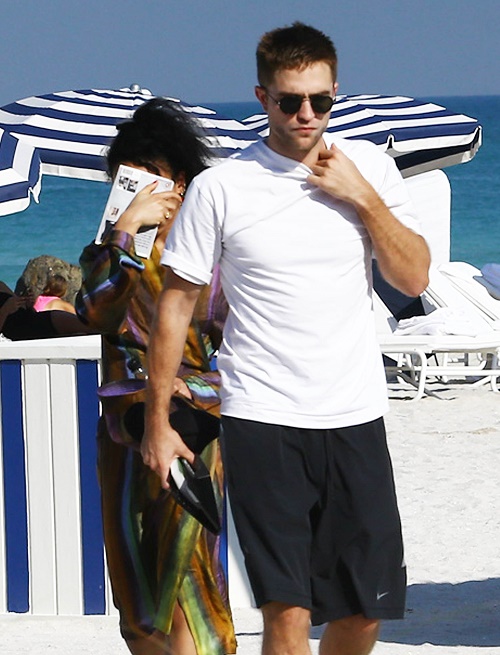 Robert Pattinson and Kristen Stewart reportedly don’t speak to each other anymore, and I’m sure some part of that has to do with FKA Twigs. Robert Pattinson had admitted in a Rolling Stones interview earlier in the year that he did keep in touch with Kristen, and that had sparked rumors of a possible Robsten reunion, especially as they were both scheduled to make appearances at the Toronto International Film Festival. However, the film festivals came and went, and Rob soon started dating FKA Twigs. Meanwhile, Kristen Stewart remained single, despite rumors of a hookup situation with Nicholas Hoult.

So what happened between Rob and Kristen that caused them to stop speaking to each other, apart from Rob having a new girlfriend, of course? According to Naughty But Nice Rob, it’s because Rob doesn’t have Kristen’s phone number – and worse, he doesn’t care.

A source tells Naughty But Nice Rob, “They have zero contact with each other. They staying in touch for a while after they split but now not at all. They don’t have each other phone numbers and don’t email each other. It’s over.”

And there’s even worse news for you Twi-hards out there; Rob and FKA Twigs apparently spent Christmas together with his parents, and then rang in the New Year’s at a London hotspot named The Russet. Now, Rob obviously did all that with Kristen as well, but he’s getting to the age where all of his friends are going to be getting engaged, getting married, and having kids. Trust me, he’s probably already thinking of proposing to FKA Twigs, which pretty much guarantees that he’s never, ever getting back in touch with Kristen Stewart. Not only does he not have her phone number, even if he entered a fit of nostalgia and wanted to call her, but he’s in a happy relationship with someone else – even if that someone else is a giant famewhore.