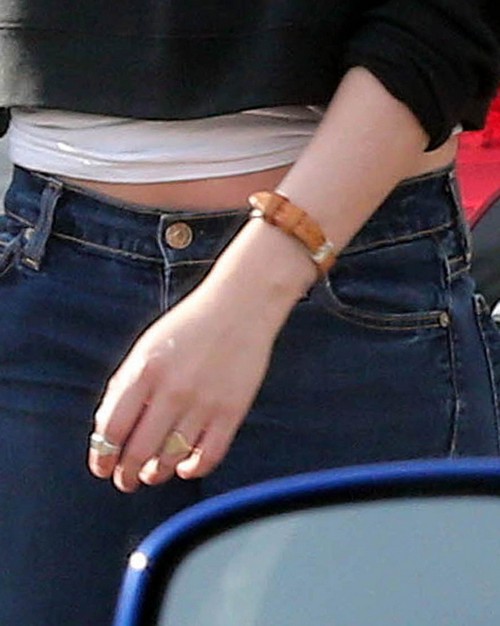 Kristen Stewart is dating Alicia Cargile and asking for more media attention to be paid her new romance and rumored engagement. Kristen Stewart is fighting back against ‘false’ tabloid reports, calling them a whole ‘other form of entertainment that is voraciously consumed’. My oh my, what big words, Ms. Stewart. Okay, we get it, you don’t like tabloid journalism or paparazzi or really, any form of media exposure whatsoever. I guess I can’t blame her for that – ever since she entered the media spotlight after Twilight exploded, she has become the media’s punching bag. However, she should thank her fans for that, not the tabloids. Tabloids publish stories that readers want to read, and fans wanted to hear about Kristen Stewart and Robert Pattinson – together or separately. Now fans want to hear about her relationship with girlfriend Alicia Cargile. Kristen Stewart and Alicia Cargile went out of their way to get ‘caught’ by paparazzi enjoying some PDA so please shut up Kristen. And If tabloids didn’t write their stories, then fans would – and frequently do – come up with their own fan fiction anyway.

So is Kristen Stewart criticizing her fans? Of course not, because they keep her in business. These actors never expose the hypocrisy of their remarks, even though they know and understand the bottom line. Tabloid exposure almost never hurts an actor’s career, and in fact, many publicists and representatives frequently coordinate with tabloids for coverage on their celebrities. So next time you’re complaining about tabloids, think about how many of your colleagues use them to write their media narrative, Kristen.

So what is Kristen doing right now? She is apparently taking a ‘self-led, middle school art class in my garage’… and then she expects the media not to run with it. Try to sound a little less pretentious, or better yet, just don’t say anything. Let’s see how that works out for once, right?

What do you guys think about Kristen Stewart’s comments about tabloids? Do you think she’s right, or more specifically, do you think Hollywood actors are usually hypocrites about their media exposure? Do you think that whenever Kristen Stewart gives an interview she invariably sounds stupid? Let us know your thoughts in the comments below.