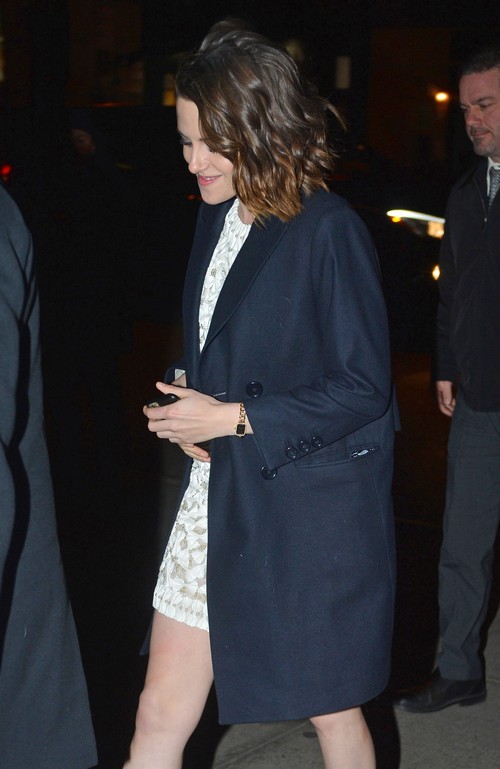 Kristen Stewart has already been spotted hooking up with Nicholas Hoult. Alicia Cargile must be heartbroken after recently trying to work things out when she was spotted with Stewart on Christmas Eve. It doesn’t seem to bother Kristen that her break up is so fresh, because she was spotted headed for an NYC hotel with Hoult on January 5, not even two weeks after the Cargile sighting.

There have already been rumblings of a hookup between Kristen and Nicholas and now it looks like the celebs can’t even hide it. Stewart and Hoult were reportedly returning from the 2015 National Board Of Review Gala in New York City when they decided to slip into a hotel bar for some drinks.

It’s pretty obvious from the pictures of Kristen and Nicholas together that the Twilight star is crushing hard. Nicholas is definitely enamored with Kristen Stewart too for whatever reason. So does that mean Kristen has made the switch back to men? Or is Kristen finally realizing that it’s just easier to date within the celebrity circle?

Maybe Kristen learned while dating her seemingly uninteresting assistant that the major stars don’t do that. Stewart was right on track when she hooked up with Twilight co-star Robert Pattinson. The fans loved it, they loved each other and then Kristen made the epic mistake of cheating on poor Pattinson, sending him into the arms of FKA Twigs.

It’s too bad Alicia Cargile was there to help Kristen pick up the pieces and now she is getting ditched just as quickly as they hooked up. Alicia’s celebrity girlfriend was one of those once in a lifetime deals. She couldn’t possibly have thought Kristen Stewart was going to be with her forever. Well, Cargile probably did but we all know that celebrities tend to jump from one romance into the other much faster than the average person.

Don’t be surprised if Kristen goes public with Nicholas Hoult soon, sending a clear message to Alicia Cargile that their romance is over. Maybe if Cargile is lucky, she can get her job back and still spend time with KStew.