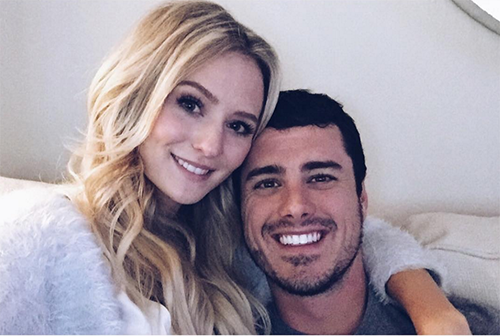 The Bachelorette 2016 spoilers tease that Ben Higgins’ ex Jojo Fletcher is currently filming Season 12. Jojo got the gig at the last minute – it was originally supposed to go to Caila Quinn. But, Caila is thrilled for her former co-star and there is no bad blood between them. Ben Higgins’ fiancé Lauren Bushnell on the other hand is green with envy – and beginning to think that she may have gotten the raw end of the deal with Ben proposed to her.

An inside source dished to Life & Style Magazine that Lauren Bushnell doesn’t think it is fair that Jojo’s cancellation prize is proving to be more fun than actually getting an engagement ring. The source revealed to the tabloid, “JoJo is having the time of her life filming ‘The Bachelorette,’ and Lauren’s just a girl with a fiancé.

Life & Style’s source went on to say, “JoJo’s on a show where all these amazing guys are competing for her and her alone, and JoJo gets her pick. She won’t have to deal with a guy who likes her and another woman.”

This only goes to prove what we have known all along – there is trouble in paradise and all those nasty rumors about Ben and Lauren being on the verge of a break-up have some truth to them. Lauren Bushnell should be thrilled about her new fiancé and making wedding plans – instead she is worried about what the “other woman” is up to now.

Of course, maybe if things had played out differently and Ben Higgins didn’t tell Jojo and Lauren that he loved them on The Bachelor – then Lauren would be more excited about planning a wedding and not second-guessing her engagement.

What do you guys think? Should Lauren be jealous of Jojo’s new gig? Does this mean that she and Ben aren’t happy? Share your thoughts in the comments below!