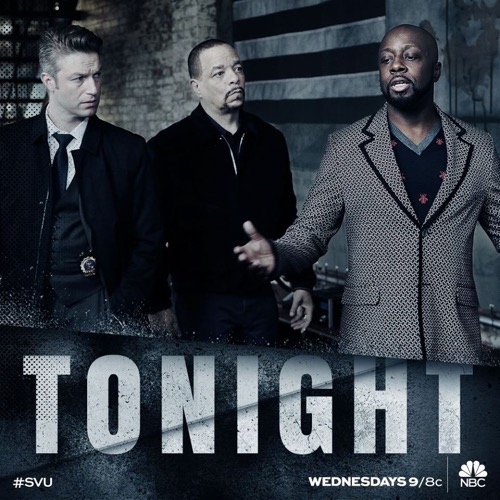 Tonight on NBC Law & Order SVU returns with an all-new Wednesday, November 9, 2016, episode and we have your Law & Order SVU recap below.  On tonight’s Law & Order SVU season 18 episode 6, the CEO of a record label is questioned by police, and so is his protégé, because they may be linked to an assault involving a transgender student.

Did you watch the season 18 episode 4 Law & Order where a sergeant (Edwards) made Benson (Mariska Hargitay) choose between loyalty and duty when his son was accused of rape? If you missed it we have a full and detailed Law & Order SVU recap, right here.

On tonight’s Law & Order Season 18 episode 2 as per the NBC synopsis, “A record label CEO (guest star Wyclef Jean) and his protégé are questioned for their involvement in the assault of a transgender student.”

Tonight’s episode of Law & Order SVU kicks off with an art student heading to a loud restaurant to meet up with someone. She heads to the bathroom and locks the stall behind her. Someone kicks in the door and beats her with a pipe and sexually assaults her. Olivia and Rollins arrive at the crime scene, the victim is being put

Olivia and Rollins arrive at the crime scene, the victim is being put in to the ambulance and is badly beaten. Witnesses say that the attacker was a black male in his 30’s, but they aren’t exactly cooperative. But, Olivia and Rollins learn that they may not be dealing with a typical attack – because their victim is transgender.

Olivia heads to the hospital to check in on Eva – who used to go by the name of Eric. She meets with Eva’s parents, they reveal that she had a boyfriend named Logan – but they were having issues and Logan thought she was cheating on him.

Olivia and Rollins head to Logan’s office, he says he has been in his office all day except for when he went to a diner for lunch. Rollins reads some text messages from Logan – he was threatening her the day before. Logan explains that it was just a fight. He reveals that they should be talking to Eva’s boss, she used to do paid appearances at clubs and parties and she got in a fight last week at a bar.

Carisi and Fin talk to Eva’s boss and learn that she got in to a fight at a party last week with one of the VIP partygoers. They find a video of Eva slapping a rapper named Hype at a party. They pay Hype a visit to ask him about his fight with Eva. Hype is shocked when he hears that Eva is in a coma and insists he didn’t have anything to do with it. Hype reveals that he figured out Eva was really a guy and he made a few jokes about it and she slapped him, and he never saw her again.

Rollins finds some pictures on social media that a fan took with Hype the day that Eva was attacked – and they were taken outside of the restaurant where she was beaten. It looks like Hype has motive now, and he was at the scene of the crime. Olivia tells Fin and Carisi to go pick up Hype, he has some explaining to do.

They bring Hype in for questioning, he still insists that he is innocent, and he didn’t see Eva at the restaurant. Hype says he eats there every day because it is right down the street from his studio and it was just a coincidence.

Rollins and Olivia pay Eva’s boyfriend Logan another visit. He reveals that Eva was cheating on him with another guy and he took pictures of them in the park together before she was attacked. They’re shocked with they realize the guy in the picture is Hype’s producer Cash Lewis. Fin questions Cash, he says that he wasn’t dating Eva. Apparently he did business with her and Eva was one of Hype’s ghostwriters. They paid her $50,000 to write a few of Hype’s songs and stay anonymous.

Olivia’s team do some digging and learn that Eva never even cashed the check – she threw it away. The lab calls and says that they got the DNA reports back from Eva, and she had Hype’s DNA under her fingernails. They find Hype heading in to the hospital where Eva is in a coma and arrest him.

At the precinct, Hype confesses that he was dating Eva and they were in love. Olivia and Fin are obviously shocked by his confession, and it’s not what they expected at all. The SVU team is torn on whether or not to believe Hype. Fin argues that Hype is a gangster – his rap career would go down the drain if his fans knew he had a transgender girlfriend. Regardless of whether Hype and Eva were really dating, that still doesn’t mean that he isn’t the one that attacked her.

Olivia sits back down with Hype to try to make sense of everything. Hype says that he was supposed to have lunch with Eva in public, she didn’t want to keep hiding their relationship. But, he chickened out that day and ditched her and went to a nearby bar.

Olivia gets a phone call from the hospital…Eva was pronounced dead. Their rape and assault is now officially a murder case.

They bring in a witness from the restaurant and they make a positive ID of the man they saw in the bathroom with Eva – but it’s not Hype, it’s his producer Cash. Carisi and Rollins head to Cash’s house to arrest him, and when they arrive they find him lying on the floor in a pool of blood, Hype is in the other room.

Hype says that he figured out that Cash is the one that attacked Eva and he went to his house and confronted him. Hype insists that Cash pulled out his gun and threatened to shoot him, and Hype shot him in self defense. Hype lawyers up and its obvious that he isn’t telling the truth about what happened between him and Cash.

They run the gun’s ID number and learn that the label owner, Vincent Love, was the registered owner of the gun. Carisi and Fin are certain that Vincent is the one that has been pulling all the strings and is behind the check that was cut to try and make Eva go away, and Eva’s attack. Barba and Olivia try to offer Hype a deal – but he won’t take it, or his lawyer won’t let him take it. Olivia is convinced that Vincent Love is paying for Hype’s lawyer, and is sabotaging his case.

Olivia gets a search warrant and finds proof that Vincent sent Cash to get rid of Eva. Olivia and Barba offer Hype a new deal – if we will testify against Vincent and Cash. He refuses to take the deal because he is not a snitch, it looks like they are going to trial.

In the court room, Hype’s lawyer says that it was self-defense and Hype and Cash were fighting over a contract dispute. The jury finds Hype guilty of murder, and it appears to be an open and shut case, he’s headed to prison. And, he could have gotten out of doing 20 years if he had just admitted in court that he was in a relationship with Eva.