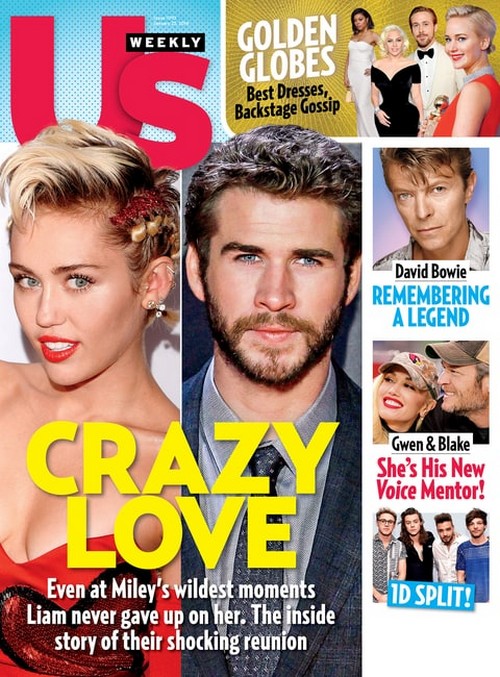 Did Liam Hemsworth get engaged on his birthday? Is Miley Cyrus planning an extravagant summer wedding? According to Miley’s Facebook page the singer – so far – has no tour dates booked yet in 2016. That could mean Cyrus left the entire summer open just in case!

Here’s what we know – Miley and Liam were spotted in Australia together on January 3. Miley cancelled a scheduled appearance in Los Angeles on January 5. Liam Hemsworth turns 26 today – January 13.

According to Us Weekly, the off-again-on-again couple has reunited. Remember, not long ago Liam spoke about the 4-year relationship with Miley in an interview. The “Hunger Games” actor stated he and Miley had truly been in love and those feelings never go away. Hemsworth revealed in the same interview that Cyrus was an important part of his life and always would be.

Pretty clever timing for a reunion and engagement announcement, don’t you think? There was buzz that Miley and Liam got engaged while in Australia at the Byron Bay Music Festival.

There’s MORE buzz that Liam Hemsworth waited until his birthday to pop the question – again. Of course we can’t forget that those in the know allege Miley Cyrus never returned the 3.5 –carat Neil Lane diamond engagement ring with which Liam proposed in 2012. Will we see Cyrus sporting this ring on her left ring finger very soon?

Has Liam accepted that Miley is a wild child? After all, Hemsworth apparently hasn’t stopped loving Cyrus. Or, has Miley been tamed? Has the “Dooo It!” singer rid her system of all the cray-cray? If Hemsworth and Cyrus are engaged will the singer/actress plan an over-the-top Miley-style summer wedding? Miley the Unpredictable may have already run off to Las Vegas to a little white wedding chapel. Who knows what Cyrus will do next?

Liam Hemsworth officially been taken off the market – again – by Miley Cyrus? Can the duo make a relationship work the second time around? Can love conquer all the obstacles the couple has faced in the past? Are “congratulations on your engagement” in order as well as happy birthday wishes for Liam?