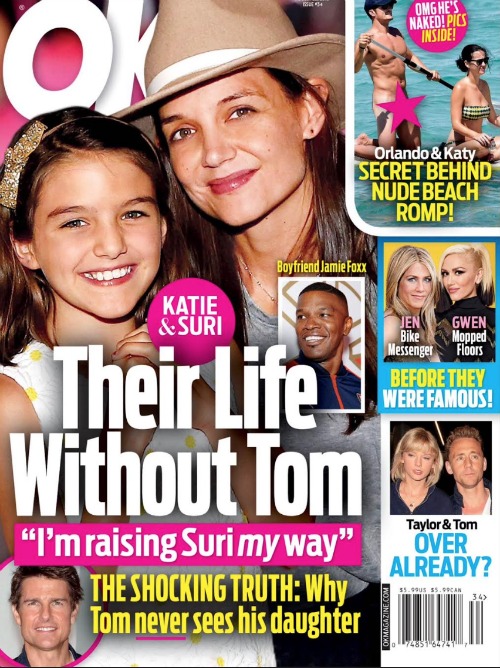 Why hasn’t Tom Cruise seen his daughter Suri Cruise? Rumors have circulated for years that Tom Cruise has no contact with the daughter he shares with Katie Holmes. While tabloids have certainly blown the story out of proportion over the years, you can’t deny the obvious, the fact that no photos of Tom Cruise and Suri have been taken by paparazzi in over 3 years. So, is Tom just the most private Dad EVER – or is he really not a part of his daughter’s life?

This week’s edition of OK! Magazine features a photo of Katie Holmes posing with her daughter Suri – who is growing up way too fast! The headline reads, “Their Life Without Tom: I’m Raising Suri My Way.” The tabloid also goes on to tease that they have an “inside scoop” on the shocking truth behind Tom and Suri’s relationship.

In all fairness, the only people who will ever know the real truth behind the rift that exists in the Cruise Family are Katie, Suri, and Tom Cruise himself. While some publications have focused on Tom’s religion (Scientology) being a reason that he doesn’t interact with his daughter, other reports indicate that Katie Holmes’ relationship with Tom Cruise’s ex-BFF Jamie Foxx has something to do with it.

At this point, the story is getting a bit mundane. And, in a few years the Suri Cruise and Tom saga will be null and void, because Suri is 10 years old, and in the age of technology, a 10 year old could find means to contact her own father and speak to him on the phone or online if need be. Plus, with as much money and as many connections as Tom Cruise has – if he really wanted to see his daughter and was not being allowed to, he would have taken Katie Holmes to court by now.