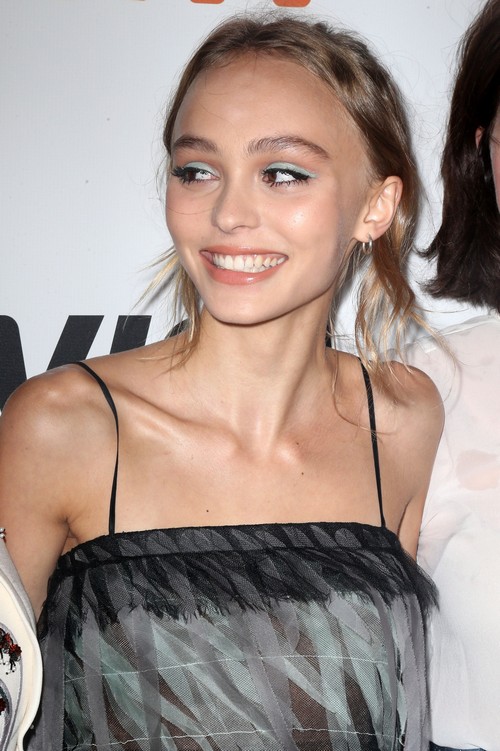 Lily-Rose Depp might be following her father Johnny Depp’s footsteps, especially when it comes to his hard-partying ways. In fact, critics believe that Lily-Rose Depp is molding herself into another Johnny Depp after the teen was spotted partying all night long to celebrate her role in ‘Planetarium’ at the Venice Film Festival.

Lily-Rose Depp’s Hollywood career is moving full speed ahead thanks to her parents, Johnny Depp and Vanessa Paradis. The French-American teen has managed to score major modeling contracts in the couture world while also trying her hand at acting in small, but impactful roles in Hollywood.

And just like her famous father, Lily-Rose Depp can’t say no to a night of hard-partying with her friends. The 17-year-old was spotted dancing and smoking outside a club with a large group of people while in Italy.

And while there’s surely no stopping Lily-Rose Depp in her fame conquests and Hollywood dreams, her father Johnny Depp has even admitted that he’s no fan of seeing her pursue a celebrity career. In fact, he’s even said that he finds it “weird” to see her wearing make-up for her modeling campaigns.

In an interview with the Daily Mail last year, Johnny Depp said, “She’s been snatched up by Karl Lagerfeld – which is a coincidence, as he spotted her mother when she was the same age, too – and when I see her with make-up and all that stuff, it’s really disturbing, because she’s a very beautiful girl, and it’s all happening so fast.”

If Johnny Depp is worried about Lily-Rose’s appearance, than what would he think of the photos of his daughter smoking cigarettes and her late night partying at a Venice nightclub?

While there’s no doubt that Johnny Depp is dealing with major problems of his own, including his Amber Heard divorce and settlement deal, is the actor worried about Lily-Rose Depp’s over-exposure in the media?

Of course, only time will tell if Lily-Rose Depp will continue making and staring in films like her father. For now though, it looks like she’s doing what any teenager her age would do, and that’s take full advantage of her freedom and newfound fame. Do you agree, CDL readers?

Celebrities attend the premiere of ‘Planetarium’ at the 2016 Toronto International Film Festival in Toronto, Canada on September 10, 2016. FameFlynet

@karllagerfeld the man himself!!!! So proud and honored to know you!