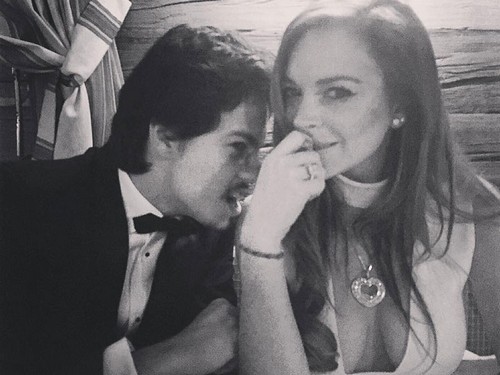 Lindsay Lohan is getting married to Egor Tarabasov! We never thought we would say this – but Lindsay Lohan has found someone insane enough to put a ring on it, and ask the troubled actress to marry him. TMZ announced that Lohan and her boyfriend Egor Tarabasov, the Russian billionaire, are officially engaged.

Lindsay Lohan and Egor Tarabasov began dating roughly 5 months ago, and the 22 year old Russian is totally smitten with the former ‘Mean Girls’ star. We’re thinking it probably has something to do with their language barrier.

Even though they have only been dating less than 6 months, Lindsay and Egor are pretty serious, he has already travelled to New York to meet her messy family. If you spend the holidays with the Lohans, and are still willing to propose, then it must be true love.

Egor may be head over heels for Lindsay Lohan, but everyone is pretty skeptical about the actress’ motives. Is she really in love with Egor Tarabasov? Or is she just in love with his bank account? Egor is quite the catch – he comes from a family of not millionaires, but billionaires.

It’s pretty hard to ignore the fact that not too long ago Lindsay Lohan was reportedly bankrupt and begging her celeb pals for money, and now she is conveniently engaged to marry a ridiculously rich 22 year old Russian.

So far Lindsay Lohan and her family have not spoken out about the engagement news. But, it will probably only be a matter of time before Lindsay floods social media with photos of her shiny new engagement ring. Seriously, we can only imagine what this wedding is going to look like.

They might want to sell tickets. What happens when you toss the insane Lohan Family in to a room with Russian billionaires?

Do you think Lindsay Lohan and Egor Tarabasov will make it down the aisle? Let us know what you think in the comments below!