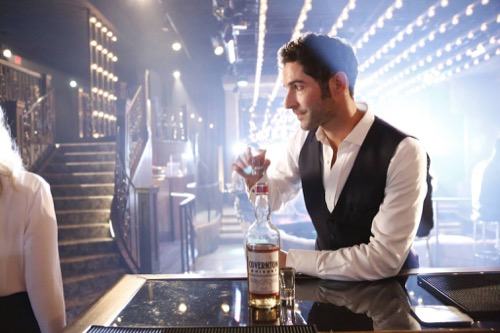 Tonight on FOX their drama Lucifer airs with an all new Monday, November 14, season 2 episode 8 called, “Trip to Stabby Town,” and we have your weekly Lucifer recap below. On tonight’s Lucifer episode Lucifer (Tom Ellis) seeks help from Ella (Aimee Garcia) in finding the sword and stopping the carnage.

Did you watch the last Lucifer episode where when the prisoner convicted of killing Chloe’s father was murdered, new evidence suggests he was actually framed?  If you missed it we have a full and detailed Lucifer recap, right here!

On the last Lucifer episode as per the FOX synopsis, “After discovering that Azrael’s blade has been stolen by a human, Lucifer quickly connects it with a string of violent stabbings revolving around a local yoga studio. While Chloe investigates the murders, Lucifer enlists Ella’s help in locating the sword to stop the carnage.”

Dr. Linda was apparently working through a few issues she had with Lucifer actually being the veil so she had asked Lucifer to come in for another session. But Lucifer had unfortunately gotten the wrong idea. Lucifer had thought that Linda had wanted to help again and he didn’t realize that he had been wrong until he noticed that Linda didn’t care about what the sandwich Chloe had made for him meant. Linda had just cared about who was and wasn’t in hell. So Linda had asked to see Lucifer because she had a series of questions. She had wanted to know how he tortured Hitler, if there was a tyrant wing in hell, and if her uncle had gone to hell.

Linda’s uncle had apparently been a jerk when he was alive and that’s why she expected to him to be in Hell. Yet, Lucifer didn’t want to talk about Hell. He had left the place because he had wanted to enjoy life on earth and had hated that his father had banished him there. So Lucifer had ended his session with Linda early and he had been more than happy when Chloe called about another case. Chloe and Dan had been assigned to the case of a young woman that had been chased through the park and repeatedly stabbed in broad daylight. And so they were left questioning why their crazed killer hadn’t been deterred by being seen.

However, several people saw the killer and they all remembered him differently. They were some that thought he was white, others that he was Black, and a few that he was Latino. So witnesses were unreliable and the only information they had to work with was a photo. A tourist that was new to the city had taken a photo near the alley where the victim had been killed and so the photo chad captured the murder yet the one thing that they could tell from it was that the blade had been unique. Dan and Chloe had thought that the blade could be a heirloom and they were pondering theories back and forth without noticing how quiet Lucifer was.

Lucifer, though, had been quiet for a reason. Lucifer had recognized the blade as Azrael’s blade. Otherwise known as the blade he had buried with his brother Uriel after he killed him so he had wanted to know how that blade had gotten out and he had asked Amenadiel and Maz to go with him to Uriel’s grave. So they had all seen for themselves that someone dug the grave and had taken the blade if not Uriel’s body. But there were a few people that knew where Uriel was buried and Lucifer had thought that anyone had talked. He had instead believed that someone had come across by mistake and so he followed the clues until they led to a yoga gym that his mother had frequently visited.

Charlotte had apparently made a map to Uriel’s grave and had handed to ten humans she hoped would dig it up. Charlotte had later said that she had wanted to talk to God and that he was ignoring her like he did with all of them. So she led humans to Azrael’s blade because she knew that the humans were more susceptible and that they would begin killing each other yet she didn’t understand why Lucifer was getting upset that she was breaking her husband’s toys because that’s how she saw humans. She didn’t think they had any importance and was surprised that Lucifer felt differently. And so she had wanted to know what was behind his fascination only Lucifer himself didn’t know why he cared.

Lucifer didn’t used to care so the fact that changed had also surprised him. So Lucifer had tried another session with Linda to see if she could help understand his emotions and Linda came up zilch. She had heard his story and hadn’t known how to handle it. Linda had said that she didn’t know how to help the Devil deal with his family problems or that the Angel of Death’s blade was out in the world however she had been shocked to find out that Azrael was Lucifer’s sister because she never thought the Angel of Death could be a woman. Though Lucifer said that wasn’t what was important.

Lucifer just wanted to figure out why his feelings about humans changed and the more he talked – the less he felt that Linda was his therapist. So Lucifer had gone to the new girl Ella for a favor and she offered him as much emotional support as she could without knowing the facts. What she did know on the other hand was that Lucifer had asked her to run an analysis of the evidence found around a big hole in the ground. However, Lucifer assured her that he hadn’t killed anyone and that he just wanted to find out who dug the whole. So Ella did her thing as a lab technician and she did find evidence and it made her believe that Lucifer wasn’t telling her everything.

The evidence she found had been a bootprint and it had been the same bootprint at their crime scene. So Ella had wanted to know what he had gotten her into and that put Lucifer in an awkward position. Lucifer couldn’t say the bootprints matched so he practically begged Ella to faith in him again that he hadn’t killed anyone and she did. Ella has been very big on faith because of what led her to God so she chose to trust Lucifer and not report what she knew was a gravesite. Yet, the crime they eventually found had proved to her that Lucifer wasn’t a killer because whoever killed that poor woman in broad daylight had been killed and a yoga massacre then proceeded to happen.

The killer was Duncan and Duncan who was filled with rage because of the blade had gone to the yoga studio that he tried to evict from his building. But when he stabbed someone, someone tried to stop him and he had dropped the knife. So they all started to kill each other as the knife affected all of them and the last person to have it was the instructor who had also been enraged. Only the instructor Lucifer and Chloe wasn’t their guy and that guy ended up getting killed by the last person that had picked up the knife. So Lucifer found out that a sweet woman from the studio had been the latest killer and he had decided to cover her because she had only killed the man that had sexually assaulted years ago.

So Lucifer had thought that would be the end however the end came when he had to rescue the knife from Dan without hurting. Yet, despite knowing what happened, Charlotte had been upset that not enough humans died. She said that she would never get his father’s attention and so he had said that her plan wouldn’t have worked. Lucifer had tried getting God’s attention a long time ago and it hadn’t worked then so he was trying to get that into Charlotte’s head that there is no reasoning with God. And she begged to differ.

Charlotte had said that she, Amendiel, and Lucifer could all contact God together and that God wouldn’t be able to ignore all of three of them when they asked to be returned to heaven. However, Lucifer didn’t want to go to heaven. He finally realized that he liked earth because it was where he felt happy and accepted. So he lost his temper at his mother and she had only backed off because she had seen the blade in his hand and had come up with another way for her and Amenadiel to change Lucifer’s mind. And as for that favor with Ella, it was a two way street and he later had to go to church with her.