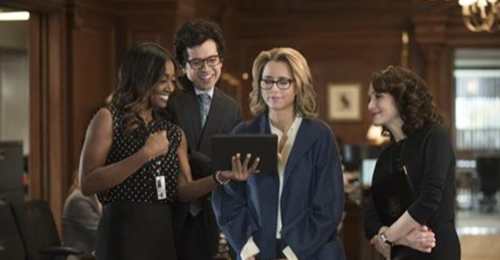 Tonight on CBS Madam Secretary airs with an all new Sunday May 8, season 2 finale called, “Vartius” and we have your weekly recap below. On tonight’s episode, Season 2 concludes with shocking news about an important political operative reaching Elizabeth, (Tea Leoni) who finds herself navigating her way through tricky waters after hearing that President Dalton (Keith Carradine) is considering replacing her as Secretary of State.

On the last episode, the U.S. debated enacting a “render safe” mission to secure nuclear weapons that belonged to the failing Pakistani government; at the same time, the terrorist Jibral Disah was pursued by the Murphy Station. Did you watch the last episode? If you missed it, we have a full and detailed recap right here for you.

On tonight’s episode as per the CBS synopsis, “season 2 concludes with shocking news about an important political operative reaching Elizabeth, who finds herself navigating her way through tricky waters after hearing that President Dalton is considering replacing her as Secretary of State. Meanwhile, Stevie and Jareth get engaged.”

This is definitely one series that you don’t want to miss and neither do I. Don’t forget to stay tuned to Celeb Dirty Laundry where we will be live blogging every episode of Madam Secretary’s second season. In the meantime, sound off in the comments below and let us know how excited you are for the second season finale.

Tonight’s episode of Madam Secretary kicks off with Elizabeth at the park going for a jog with Mike B, she invited him out with her because they have to discuss something sensitive that she hasn’t even read her staff in on yet. She tells Mike about her meeting with Prime Minister Advonin, and that Advonin offered to trade her Dmitri (who is supposed to be dead) and his sister Talia for Russian spy Peter Buckley.

Mike freaks out, he tells Elizabeth that she is being stupid and reminds her that Buckley is responsible for the death of 6 CIA agents – and there is no way that Dalton and Russell Jackson would let it happen, especially during an election year. Mike thinks that Advonin is lying, and Dmitri is really dead – he is just manipulating her. Elizabeth tells him that she is going to try to make it happen, regardless.

Elizabeth heads home and her family is having breakfast. Henry is still on vacation and making the most of his time – he wants to play mini golf, and he even dug a fire pit in the backyard. Stevie has more important things to deal with. Her boyfriend Jareth just took a 2 year fellowship in Oxford. After the kids leave, Elizabeth tries to talk to Henry about whether or not he is going to therapy – he shuts her down.

At work, Jay briefs Elizabeth and her team – the terrorists seem to have all gone underground, and everything is on course for their fight against terrorism. Elizabeth rushes out, she says she has an appointment. Matt corners her on the way out, he is working on her commencement speech for UMass, she said she will mull it over and come up with a theme.

Elizabeth heads to a church for a super secret meeting with Anton, a cultural attache. She tells him that she needs information on Dmitri. Officially, Dmitri died of a fever after he contracted an infection. Elizabeth needs hard evidence that Dmitri is still alive. Elizabeth reminds Anton that she helped get his daughter Katarina in to Harvard, and he agrees to help her.

Henry takes the kids and Jareth to mini golf – Alison runs off because she recognizes some guys from her school. Meanwhile, Jason is having a meltdown because he cant sink the ball. Jareth takes Henry aside, he tells him that he wants to marry Stevie before he goes to Oxford. Henry heads home and tells Elizabeth, and she is shocked that Jareth is planning on proposing – she thinks they are rushing in to it. Elizabeth is furious when she learns that Henry gave Jareth her blessing, without even discussing it with her.

The next day Mike B shows up at the office with his dog. Elizabeth fills Jay and Nadine in on her plan to trade Peter Buckley. Mike ran some numbers, and over 40% of people polled are against the idea of trading Peter. Elizabeth tells Jay that she wants him to start working on a package to make th trade seem more enticing when she pitches it. Mike B has even worse news though, he tells Elizabeth that he heard through the grapevine that the White House is looking for a new secretary of state. Elizabeth laughs it off – she says she isn’t worried about that, and President Dalton is her friend, he wouldn’t fire her.

That night Stevie and Jareth show up at the McCord house and announce that they are engaged. Apparently, Jareth went all out and put an engagement ring in her parfait and got down on one knee at a restaurant. Elizabeth and Henry are thrilled – until Stevie tells them that she and Jareth are getting married this weekend at the court house in DC.

Elizabeth meets up with Anton, he has bad news for her – he says that Dmitri is really dead and he shows her a photo of him right after he was executed with a gun shot wound to the head. Elizabeth calls Andoniv, furious, she shouts at him for trying to play her. Andoniv insists that the photo was faked just to make sure Dmitri was really believed to be dead. Elizabeth isn’t totally buying it – but she seems to be moving ahead with negotiations, she tells Andoniv she wants Talia released first before they move forward with Peter Buckley.

Mike B and Nadine rush in to Elizabeth’s office. They have bad news. It looks like President Dalton is definitely replacing her, with a politician named Hastings. Apparently, Hastings’ wife has already gotten their kids on DC waiting lists at private schools. Elizabeth storms out of her office. Matt corners her in the hallway and wants to talk about her UMass speech. Elizabeth blows him off and says she is not going, she tells him to go to the college and read the speech since he wrote it anyway.

Elizabeth storms in to Russell’s office and demands to know if they are replacing her with Hastings. Russell knows she has been trying to trade Buckley and he tells her she has no business. Then he confirms that her job in on the line, but he refuses to talk to her about it, he tells her that he will get her a meeting with President Dalton.

Meanwhile at home, Henry is dealing with a crisis of his own and trying to convince Stevie that a shot gun wedding is a horrible idea. Stevie admits that she is scared and feels like they are rushing, but at the same time she is in love with him, and she is scared that the odds of her finding someone as great as him later when she is ready to get married.

Elizabeth is obviously in shock. She apologizes for freaking out on him. Elizabeth excuses herself and says that she will need some time to think about the offer. Before Elizabeth leaves, Dalton tells her that giving up Peter Buckley is out of the question. Elizabeth argues that Dmitri’s work prevented a world war – and Buckley is not a threat to American security. She pleads with the President that they have a chance to make things right. Dalton agrees to think about it.

Stevie meets up with Jareth and tells him that she has cold feet and has decided she isn’t ready to get married. They work out a long distance plan and agree to stay together and remain engaged while he is in Oxford. Stevie will join him in Oxford this summer.

Elizabeth heads home – she has a lot to tell Henry. First she reveals that there is a chance that Dmitri is still alive, and Dalton has agreed to trade Buckley. Elizabeth warns Henry that it could all be a game – Dmitri might not really be alive. They need someone at the trade that can identify Dmitri – Henry is heading to Finland for the trade. While they are packing to go to Finland, Elizabeth reveals that Conrad also invited her to be Vice President.

Mett heads to UMass on behalf of Elizabeth and gives an amazing speech, he’s a hit with the graduates. Meanwhile, Elizabeth and Henry arrive in Finland to meet with the Russians and trade Dmitri for Buckley. The Russians brought along Dmitri and he is still very much alive, the trade is successful, but Dmitri is not very happy to see Henry, he spits on him. After an emotional moment, Dmitri hugs Henry, Elizabeth watches from the car teary-eyed.