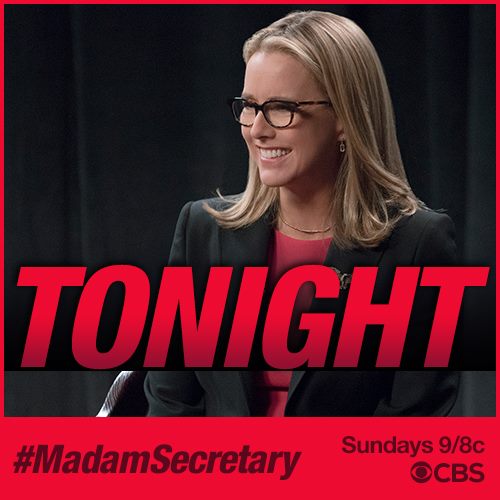 Tonight on CBS Madam Secretary airs with an all new Sunday, October 2, 2016, season 3 premiere called, “Sea Change” and we have your Madam Secretary recap below. On tonight’s Madam Secretary episode, Season 3 begins with  Elizabeth (Tea Leoni) asking President Dalton (Keith Carradine) to risk change in an election year after a storm destroys a naval base in Bahrain, prompting the secretary of state to urge the commander-in-chief to reexamine his approach to climate change and his overall foreign policy.

Did you watch last season’s Madam Secretary finale where shocking news about an important political operative reached Elizabeth, (Tea Leoni) who found herself navigating her way through tricky waters? If you missed it, we have a full and detailed recap right here for you.

On tonight’s Madam Secretary Season 3 premiere episode as per the CBS synopsis, “When a storm destroys a naval base in Bahrain, Elizabeth (Tea Leoni) urges President Dalton (Keith Carradine) to reexamine his approach to climate change and his overall foreign policy, something that could jeopardize his re-election campaign. Also, Jose Campos (Carlos Gomez) tries to bring Henry back into the DIA fold, and the McCords worry that their family is being stalked when they discover Jason’s laptop may have been hacked.”

Tonight’s episode of Madam Secretary kicks off in the White House – Elizabeth, Dalton, Russell and their team are watching live coverage of the Presidential nominations. Elizabeth was running as Dalton’s Vice President. The news anchor announces that they have made a projection and Dalton lost the race. Russell freaks out and says that they can’t make a projection this early – the votes are too close. Dalton excuses himself and tells Russell that “it’s over.” After Dalton leaves Russell sneers at Elizabeth, “This is all your fault.”

2 Months Earlier: There’s a massive storm at sea, the American Naval base in Bahrain is desperately trying to anchor the ships. One office named Kelley is thrown overboard.
The next morning, Elizabeth and Nadine are en route to a county fair in Virginia, she is already starting her press route. A campaign manager named Jessica tags along to make sure that Elizabeth doesn’t say anything wrong during her speech.

After judging the pig contest, Elizabeth heads back to her office to meet with her team. They brief her on the Naval Base in Bahrain, Officer Kelley is in critical condition, and the base took billions of dollars worth of damages.

Elizabeth rushes off to meet with the Prime Minister of Tunisia, after she leaves Daisy and Jay discuss Dalton’s competition. A Governor from Pennsylvania named Sam Evans is gaining in the polls and they are worried.

Henry is teaching at the college, after his class his old pal Jose from Murphy station stops by. He says they are getting the gang back together, they have a new mission. Apparently, there are some survivors of Shaheed hiding out in Algeria. Henry says that he wants to sit out of this mission, he wants to spend more time with his family, Jose convinces him to “Think about it.”
That evening Elizabeth and Henry attend a dinner function at the White House for the President. Russell greets her at the door and tells Liz that she needs to charm the pants off everyone there so that they will accept her as VP. Of course, the first guy that she is introduced to wants to talk about the naval base in Bahrain. She’s getting pressed to make sure that the naval bases are kept safe. Dalton takes Henry aside and warns him that campaigning can be grueling and he isn’t going to have a free second, he hints that Henry should cut back on his work.

Elizabeth and Henry head home, they both had a horrible night. Liz is already feeling like the election is messing up their lives. During breakfast the next morning – they are all rushing around to get out of the house. Jason’s laptop isn’t working – Henry takes it to work with him to have Oliver look at it.

Elizabeth arrives at the office and Jay is waiting for her. He met with the DOD about the Bahrain naval base, and he is pretty upset. Apparently, the naval bases are in danger, and they are going to keep getting destroyed by storms if they don’t build higher up because of rising sea levels. The DOD has made several reports about the sea level, but the government keeps burying them.

Henry is shocked when he meets with Oliver and learns that there is a Trojan Virus installed on his son’s computer. Oliver thinks that it could be someone attacking his laptop because of who his parents are and tells him to take it to the FBI.

Elizabeth and Jay barge in to Dalton’s office. Elizabeth wants to know why every respected scientist in the country warned them about sea levels and the Bahrain naval base, and their contractor Burton Enterprises did nothing to address the problem. Russell kicks all of the campaign managers out of the office and he reminds Liz that Burton Enterprises is one of the President’s biggest donors. Liz won’t back down, she thinks it is ridiculous that they even still have a naval base in the Persian Gulf. There are countries like Tunisia that actually need the US’s aid. Dalton snaps at Liz and tells her that she is absolutely insane to recommend that they give their foreign policy a complete overhaul and alienate one of their biggest donors in the middle of an election.

After her fight with Dalton, Liz calls Henry – she’s afraid Dalton is going to fire her. While Henry is walking down the street and talking on the phone, someone jumps him and steals Jason’s laptop and rides off in a black van.

Henry’s ribs are cracked, he heads home and the kids and Elizabeth dote over him. The FBI is handling the computer theft. But, they downplayed it and said that it was probably just a random act of violence. Elizabeth gets Henry settled in and the rushes off to an interview with Jane Pauley. She’s not supposed to let the ca tout of the bag and reveal she is running for VP yet, Liz tries to dodge the election questions. So, Pauley brings up the naval base in Bahrain instead. Liz announces that climate change is a serious issue, and the government needs to address it.

She heads back to the White House, and Russell freaks out on her. He shouts at her to keep her mouth shut about climate change until the end of time.

Dalton is getting ready to take the stage for a debate. Right before he goes out, he gets word from Russell that Officer Kelley passed away. Dalton calls the Kelley family personally to send his condolences. Then, he starts the live debate. Evans is giving him a run for his money, he uses Kelley’s death to prove that Dalton doesn’t protect the American military. Dalton shocks everyone by supporting Liz’s climate change theory, and the need for upgrading naval bases. Russell watches in horror as Dalton says that he is going to go against his own party to change the world.

Fast Forward 2 months: Dalton just lost the nomination, he won’t be running for a second term. He’s watching the news in his room – Russell and Elizabeth interrupt. Russell tells Dalton that there is still work to do, he has to endorse Evans, and there is still 7 months left in the office.

The next morning Elizabeth goes to work, she and Dalton sit down with the Prime Minister of Tunisia and hash out a treaty. He thanks them for going against their party’s wishes and working with Tunisia, he knows it may have cost them the election.

Afterwards, Elizabeth runs in to Governor Evans – he tells her that as soon as he takes over, he is undoing her treaty with Tunisia. He scoffs that so much damage has been done to their political party, he wants her to stay on as Secretary of State after Dalton leaves the office. Elizabeth makes up an excuse and runs back in to Dalton’s office. She tells Dalton not to endorse Evan – she thinks he should run Independent without his party’s support. Liz gives him an inspiring speech about making history and “going out fighting.”

Getting Russell on board is not as simple – he argues that he doesn’t want to go against his party. And, the odds of Dalton winning is slim, but its not impossible. The only way that Dalton stands a chance is if he wins over Evan’s state of Pennsylvania. Russell has a plan, they will ask a popular Senator from Pennsylvania to be the VP instead of Elizabeth.
That night Elizabeth and Henry are getting ready for bed. Henry opens his bag and finds a stack of photographs that were taken of their kids. Someone must have slipped them in to his bag. Elizabeth freaks out, someone is stalking their kids …