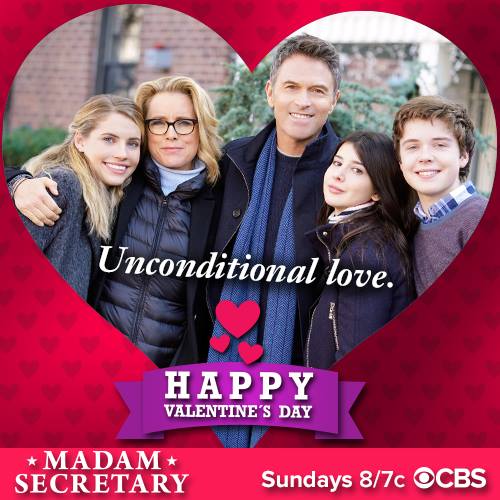 Tonight on CBS Madam Secretary airs with an all new Sunday February 14, season 2 episode 14 called, “Left of the Boom” and we have your weekly recap below. On tonight’s episode, Elizabeth (Tea Leoni) oversees a mission to track down the culprits behind a uranium heist in Eastern Europe, while at the same time trying to prevent the dismantling of an important arms deal in Saudi Arabia.

On the last episode, the death of Henry’s father lead the family to uncover some rather shocking secrets that open old wounds for them, leading to a confrontation between Henry and his grieving sister Maureen, who felt her brother should have been home more. Elsewhere, Russell kept important information from Elizabeth’s team at the State Department. Did you watch the last episode? If you missed it, we have a full and detailed recap right here for you.

On tonight’s episode as per the CBS synopsis, “Elizabeth oversees a mission to track down the culprits behind a uranium heist in Eastern Europe, while at the same time trying to prevent the dismantling of an important arms deal in Saudi Arabia, which is threatened by the apprehension of two American teenage girls who intended to join a terrorist group.”

Madam Secretary Elizabeth McCord was hosting a conference on the importance of female education and so she had naturally invited Noura al-Kitabi, a Saudi national, to be her keynote speaker. The young woman has been vocal for years and has even become a world renowned advocate for women and girls’ education after she fearlessly continued to speak out despite a vicious acid attack. And therefore Noura was literally the most perfect choice for such a conference.

However, Saudi Arabia had a problem with Ms. Al-Kitabi. Noura al-Kitabi had apparently become vocal about more than just education or lack thereof in the last few months and her criticism against Saudi Arabia’s Royal Family is considered to be a national offence in that country. So their ambassador had contacted the president’s office and told the Chief of Staff that in no uncertain terms should their Madam Secretary been seen with Ms. Al-Kitabi.

Apparently some may take it as if Elizabeth personally agreed with the young woman. And so the Royal Family, i.e. the Saudi government, have asked for Elizabeth to distance herself from a person they now believe is a radical. Or the arms agreement that was currently in the works between the U.S. and Saudi Arabia, and that the U.S. had personally spearheaded, would never make it off the ground

Yet Elizabeth doesn’t like threats and, on this one, she honestly thought they were overreacting. Thus she tried to strive for a middle ground with them where she wouldn’t have to disinvite her keynote speaker. And she came up with the idea that she would view Ms. Al-Kitabi’s speech not from the audience but from a remote area.

So Elizabeth had tried to leave things there but eventually she had to speak with Prince Asim of Saudi Arabia about another matter.

It seems the Saudis had forgotten to notify Elizabeth and her department about the two U.S. citizens they had their custody. Two teenage girls had run away from home recently in order to join a jihad and pretty much the whole world had believed they were residing in Libya somewhere. But as it turns out they never made it to Libya.

The girls had actually been found during their travels by the Saudi government who then arrested the two sixteen-year-olds for plotting an attack on Saudi soil. Though Elizabeth thought that was laughable seeing as the extremist group the girl had been willing to join were in fact receiving funding from Saudi Arabia. Therefore, Elizabeth had been pretty clear with Prince Asim. She told him that she did what they wanted and that now they have to do something for her. Like returning the two U.S citizens they were detaining.

Although, Elizabeth meeting with the prince had made her miss out on her daughter Alison’s Parent/ Teaching Conference. And that meeting had been about something important.

Alison as well as few of her “friends” had been caught cyberbullying a classmate of theirs. Apparently someone had created a webpage just to make nasty comments about the girl and they had left it open for others to post of their own. So the principle had notified Elizabeth and Henry about the page because their Alison had posted a particularly cruel jab about the bullied’s girl fashion sense.

And because Elizabeth had a thing with Saudi Arabia, Henry had attempted to handle both the conference and the talk with their daughter on his own. But he honestly wasn’t very good at it. Alison had told him that it had been her friends that had used her account to post the comment and so she thought her dad would feel better knowing that she hadn’t gone out of her way to bully someone yet that had only made things worse with Henry.

Henry wanted his daughter to think for herself and he had been angry that his daughter had simply stood by while her friends sought out ways to hurt a defenseless girl. And that in turn put Alison on the defense. Though she understood where he was coming from.

Alison may have been angry with her father at first for things he said, but she had been angrier with herself. Alison had known that what she and her friends were doing was wrong and the only reason she had gone along with it was because she hadn’t wanted to fit in with her “friends”. So, once he knew why his daughter had acted that way, Henry later had change of heart about Alison’s punishment because he too remembered wanting to fit in.

And thus Henry ended up taking all of three of his kids to the conference later on furthering female education.

Both parents had wanted their kids to listen to someone as inspirational as Noura al-Kitabi and it helped eased Elizabeth’s mind about the decision she had to make for herself if her whole family was there to support Ms. al-Kitabi even when she couldn’t. Yet Elizabeth hadn’t been idle in the past few days.

Someone had apparently stolen a truck load of uranium and nuclear physicist managed to disappear around the same time. So naturally Elizabeth and her team had been concerning about a terrorist group using that uranium to create radiological weapons. And had a team had been put in place to get that uranium back. Which they did.

And so at first, it had seemed as if all of the crises had been contained. The Uranium had been found before it could be sold and those two teenagers had been returned to the States.

But someone was bothering Elizabeth. She said that everything had been too neat and at times coincidental. Thus she took another look at the grand picture and she managed to connect some unfortunate dots.

The foreign government had been working with the known terrorist group and in return the group was going to assassinate Noura al-Kitabi on both national television as well as on U.S soil. Therefore, Elizabeth had tried to get the conference building cleared and her family moved to safety but sadly Henry had gotten too close to the radioactive bomb.