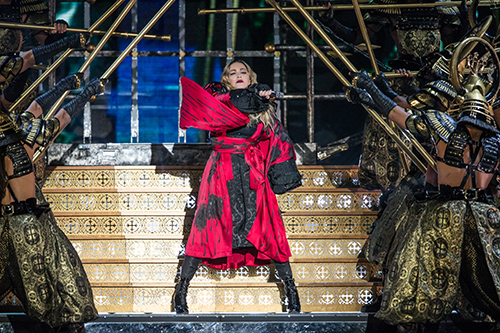 Sean Penn and Madonna are on drug lord Joaquin ‘El Chapo’ Guzman’s hit list. Are Sean and Madonna being forced to up their security in an effort to protect themselves from El Chapo thugs?

Following Sean Penn’s interview with El Chapo, the drug lord was arrested on January 8 during an explosive raid. This has naturally outraged El Chapo and all of his associates. They are seeking revenge on Sean Penn and Madonna for allegedly being the tipsters that led to El Chapo’s capture and arrest.

If you recall, El Chapo and his thugs orchestrated his escape from Mexico’s highest maximum security prison through a mile long tunnel that they dug. They will now be putting even greater effort into seeking revenge on Sean Penn and Madonna for getting El Chapo put right back behind bars. Apparently, those guys aren’t looking forward to digging another tunnel.

Former U.S. Customs Service Agent, John A. Carman, has revealed to the Globe that El Chapo will have his henchman who are known for lopping off their victims heads and sewing their faces onto soccer balls go after Sean Penn and Madonna to get revenge for his arrest. “El Chapo’s associates are going to want payback for his arrest,” Carman revealed. “They blame Sean and Madonna for bringing down the ‘most dangerous man in the world.’ That will mark them both for death.”

When I saw that Madonna was part of this ordeal, it made me scratch my head a bit. But, if you weren’t aware, Madonna and Sean Penn have been rekindling their love and perhaps even getting back together after being divorced for all these years. So it certainly makes sense for El Chapo to want to go after Sean’s significant other, even if they aren’t an item officially in Hollywood.

El Chapo is just going to assume that Madonna was part of the picture that got him arrested again. Perhaps El Chapo got wind of the fact that U.S. Attorney Preet Bharara is planning to extradite and prosecute El Chapo. “He plans to subpoena Sean Penn’s cell phone, and the records will reveal whether Madonna had prior knowledge of Sean’s meeting. Getting back with Sean may have been the kiss of death,” says the source.

Holy moly. This just got all kinds of freaky. If Madonna and Sean Penn have to live their lives in fear all because Penn had to go and do that jungle interview with El Chapo, he should be slapped around. Big time. What a fool.

What do you guys think? Will Sean Penn and Madonna have to watch their back’s for the rest of their lives? Or will this somehow just all blow over? Share your thoughts in the comments below.