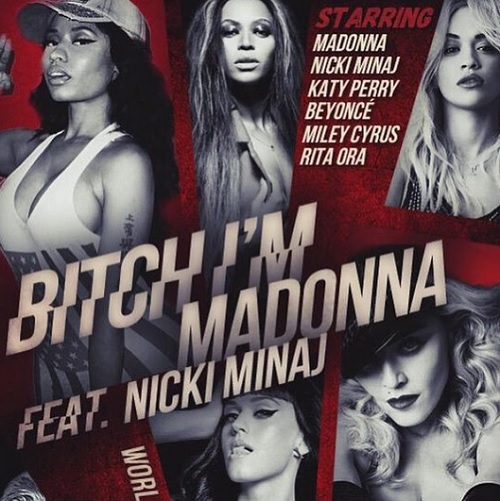 Madonna is pulling a Taylor Swift and recruiting half of Hollywood to appear in her new music video, “Bitch I’m Madonna.” And it is safe to say that Madonna has chosen sides. She is clearly Team Katy Perry in the never-ending Katy VS Taylor feud which all began over a year ago over back-up dancers. Madonna released the artwork for her new music video, and it bears an uncanny resemblance to Taylor’s “Bad Blood” music video – and, coincidentally, Katy Perry is starring in it.

Taylor Swift nearly broke the internet when she debuted her music video “Bad Blood,” which was rumored to be about her feud with Katy Perry. She recruited a host of celebrities to appear in the video, including some big names like Ellen Pompeo, Cara Delveligne, Kendrick Lamar, Karlie Kloss, Lena Dunham, and Jessica Alba. Selena Gomez also appeared in the “Bad Blood” music video, rocking a short black wig that seemed to mock Katy Perry’s latest hairstyle. The video received over 200 Million views on YouTube in less than a month.

Now, Madonna is trying to mimic Taylor Swift’s success and has released the “Bitch I’m Madonna” artwork for the video, which eerily employs the same colors and even the same font as Taylor’s video art. Madonna’s music video will be starring Katy Perry, Nicki Minaj, Rita Ora, Beyonce, and Miley Cyrus. Ironically, Madonna’s knock-off “Bad Blood” video not only features Taylor’s enemy Katy Perry, but also her Calvin Harris’s ex Rita Ora. You can’t say that is a coincidence!

So, what exactly is Madonna’s beef with Taylor Swift? Is she just trying to cash in on Taylor’s feud with Katy Perry? How do you think Taylor will react to the not-so-subtle shade that Madonna is clearly throwing her way? Let us know what you think in the comments below!