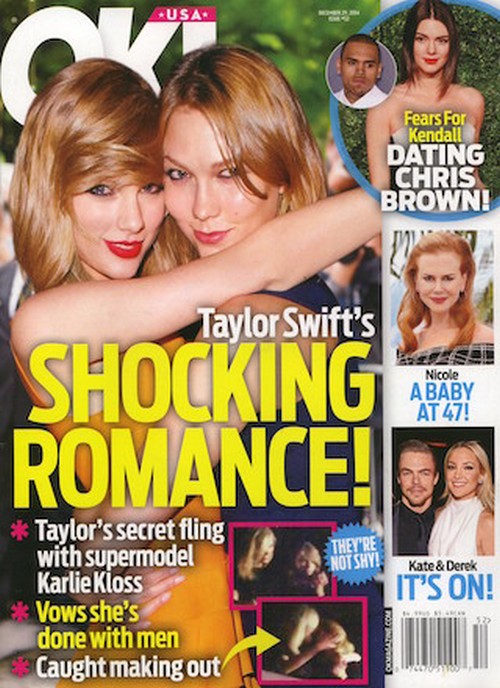 Is Taylor Swift gay? According to new reports, Swift has apparently switched teams – and is dating a woman, Victoria’s Secret model Karlie Kloss! Considering the singer’s disastrous track record in dating, from the likes of John Mayer and Harry Styles, to Joe Jonas and Twilight hunk Taylor Lautner, we all really should have seen this coming a mile away. Apparently, Taylor Swift has given up on men all together — and found herself supermodel Karlie Kloss!

The December 29th edition of OK! Magazine (check the photo) reveals, “The 25 year old singer is seeing someone, 22 year old model Karlie Kloss! Taylor’s rep denies they are an item, but the ultra-leggy BFF’s were spotted kissing during a December 4th rock concert by the band The 1975 at New York City’s Terminal 5, and the source confirms the lip-lock (which was caught on camera) wasn’t just an errant peck on the cheek.” OK!’s source goes on to explain, “Taylor and Karlie had chemistry since the moment they met. And while Taylor has never really been attracted to women before, she quickly developed feelings for Karlie.”

After chatting on Twitter and getting to know each other online, Taylor and Karlie met for the first time at the 2013 Victoria’s Secret fashion Show last December in 2013. Karlie was reportedly into Taylor since before they even met – but Taylor had just come off from a string of bad break-ups, so it was a while before their friendship blossomed into a romantic relationship. According to OK! Magazine, there may already be trouble in paradise between the model and singer, because Karlie has devoted herself to Taylor – but Taylor still isn’t sure if she wants to give up guys altogether.

So, what do you think of Taylor Swift’s new girlfriend? Are you still as shocked and blind-sided as we are? On the up side – imagine all the new material Taylor has for her next album! Let us know what you think about Taylor and Karlie dating in the comments below!