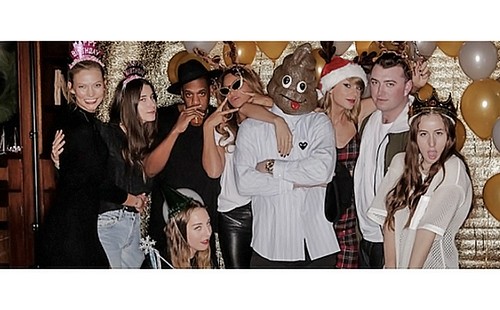 Taylor Swift performed at the Jingle Ball in Madison Square Garden this weekend, and Taylor Swift celebrated her 25th birthday party right after with some of the biggest celebrities in the music industry. According to reports [and pictures], Beyonce, Justin Timberlake, Jay-Z, Sam Smith, Karlie Kloss, and HAM were all there, but guess who wasn’t there? That’s right, Katy Perry, Taylor Swift’s enemy. Of course this was no mystery since Taylor Swift hates Katy Perry who was NOT invited Taylor’s star-studded birthday party!

No, I’m not being facetious by calling Katy Perry an ‘enemy’ of Team Swift, since Taylor’s already made it odiously clear in all of her actions. She wrote a song about her feud with Katy Perry, she hinted at it during some big interviews, and she more or less made it impossible for people to NOT figure out the feud. Meanwhile, Katy Perry has also responded in passive-aggressive tweets, and it’s become extremely obvious to even the most dim-witted fan that Taylor Swift and Katy Perry are embroiled in the music feud of the century.

See, this is always Taylor Swift’s play – show off and prove that you’re cooler than your opponent. She would do this after her breakups, so it makes full sense that she would do it with her enemy in the music industry. She’s proving that she has the biggest connections in the biz – that Jay-Z and Beyonce and Justin Timberlake are all willing to hang out with her and party with her at her apartment. She took pictures to prove it, and then she tweeted and Instagramm’d those pictures for the whole world to see. You can’t be more obvious than that, can you?

What do you guys think? Was Taylor rubbing the feud in Katy’s face? And in the long run, do you think that either Taylor Swift or Katy Perry will drop their enmity? Let us know your thoughts in the comments below.