Taylor Swift Will Do Whatever It Takes To Break Into Movie Industry And Win An Oscar! 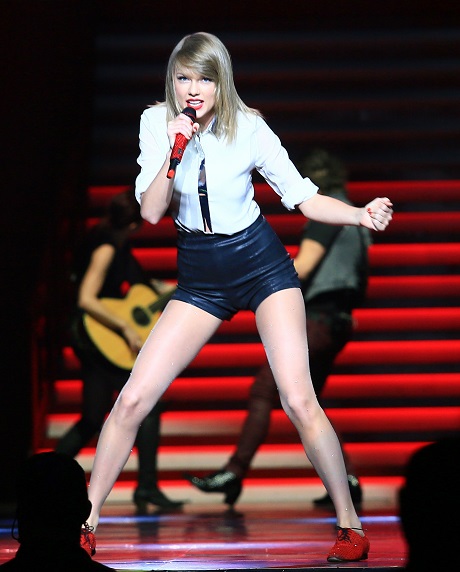 Seven time Grammy winner Taylor Swift is desperate to add an Oscar to her collection of awards. Sources close to the singer say that since she has conquered the music industry, she now wants to dominated the box-office and become an A-List movie star. “She’s now eager to be taken seriously in another area of show business,” a source told Radar Online. “Taylor badly wants to be a movie star. She’s determined to prove herself as an actress and not simply a singer who dabbles in movies.”

The reigning country queen has had a few cameos in movies like Valentine’s Day and The Lorax and she’s even appeared in episodes of CSI and New Girl. But she wants more. She wants to be taken seriously as a credible actress.

It’s been reported that she’s been offered up to $10 million to make a concert film like Justin Bieber and Katy Perry, buts she’s turning down those offers.

“Taylor is now under pressure to make her first major movie deal. She doesn’t just want to be known as a singer, so she’s trying to get aligned with some high profile, non-musical productions,” the source added.

If you recall, Taylor was reportedly considered for the role of Eponine in the 2012 critically acclaimed film adaption of Les Miserables. Although she didn’t get the part, she will star in the highly anticipated film, The Giver. The film premiers in August and will also star Meryl Streep.

“When I look at acting careers that I really admire, I see that it’s been a precise decision-making process for these people. They make decisions based on what they love and they do only the things that they are passionate about. They play only characters that they can’t stop thinking about,” Taylor said about carefully reading scripts and finding the right one.

Although she may not be on Meryl’s level just yet, the source reveals the real reason Taylor’s team only has top directors direct her music videos and commercial spots. “The directors are asked to encourage and nurture Taylor’s acting skills above all else.”

Making a few a music videos and having cameo appearances simply because you are famous does not mean you can actually act. Taylor Swift is a natural at songwriting and strumming the guitar, but I don’t see her as the next Barbra Streisand. She’s barely mastered the craft of actually sounding decent while singing live.

It’s unlikely that Taylor will win an Oscar for her acting abilities any time soon. But she is currently reading scripts now that her upcoming album is finished and may even surprise us on the big screen. Do you think Taylor Swift has what it takes to become a movie star? Join the conversation and leave a comment.