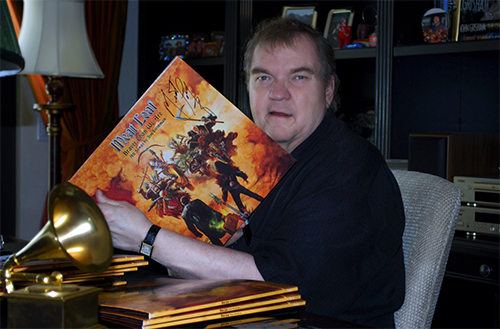 Meat Loaf is blaming his recent on-stage collapse on dehydration, despite rumors that the 68-year-old singer is battling much more serious health issues. Singer Meat Loaf shrugged off his recent collapse during a concert in Canada back in June, telling the Today show that “It was nothing but dehydration.”

His health scare occurred during an encore performance of his hit song, “I’d Do Anything For Love” at the June 16 concert at the Northern Alberta Jubilee Auditorium. The event was caught on camera by a fan and uploaded to Facebook.

In the same interview, Meat Loaf confirmed that his current album Braver Than We Are will be his last, leaving some to speculate that his on-stage collapse was due to a more serious health concern. Despite a very public battle with his weight, the singer maintains that he lives a healthy lifestyle that began with his football days, telling FOX & Friends, “My football days made me who I am…You’ve never seen me have a picture in the paper with a DUI, you don’t see me hanging out in the clubs, you don’t see me drinking. I’m very disciplined.”

The singer went on partially blame knee surgery on his desire to stop making music, claiming that after surgery he is no longer able to run around on stage and provide the exciting, energetic shows that he is accustomed to providing for his fans.

The differing accounts of his state of health are telling. On the one hand, he claims to live a clean and healthy lifestyle thanks to the discipline he gained on the football field. On the other hand, he claims he collapsed during a performance because of severe dehydration, says that a knee surgery is hampering his mobility to the point where he can’t give the kind of performances he wants to provide for his fans, and has been obese for most of his life.

Meat Loaf’s claims of dehydration being the reason for his collapse may just be a case of self-delusion: the 68-year-old singer may just be in denial about both his age and the true state of his health.

Do you think Meat Loaf is calling it quits because of a secret health condition or is his lifestyle as pristine as he claims? Tell us your theories in the comments below!

Finally release day is here!! So excited to finally get the album into your hands (US it will be in yours next… https://t.co/2X00FgQ1xu