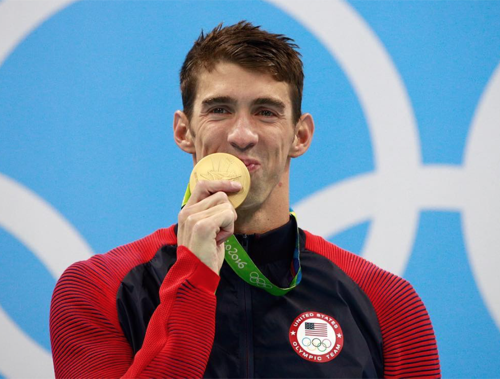 With the 2016 Rio de Janeiro Olympics concluding tomorrow, and ABC’s Dancing With The Stars starting next month, who would you like to see hitting the dance floor? Many Olympians’ names have been mentioned recently, from Ryan Lochte, Simone Biles, Katie Ledecky to Michael Phelps. If ABC is looking to bring in headlines, they really don’t have to look for celebrities beyond those who have showing off their talents these last two weeks.

Simone Biles had responded to the rumors that she would be Dancing with the Stars’ top Olympian pick. She didn’t quite say “no” to a future season, but admitted that once the Olympics are over, she will be on a three-month tour, so it didn’t look like she would have time to do the show, but said if they have a season in the Spring, she would like to do it.

It looked like Dancing with the Stars (DWTS) had won over Ryan Lochte, and it was finally going to happen this season; it had been a constant battle between him and ABC, as he had always said “no” to the show. DWTS quickly ended their pursuit of him the second he got caught up in the middle of a fake robbery incident in Rio.

With Ryan being in a “heap of trouble”, and not being such a great role model, maybe ABC will look towards his long-time rival, Michael Phelps. Phelps and Lochte have been battling it out in the swimming pool for nearly 15 years, usually ending with Phelps being the victor. If Michael Phelps agrees to join DWTS, it would be just one more way for him to one-up Ryan Lochte.

Michael Phelps is 31 years old and the most decorated Olympic athlete of all-time. He has just finished a grueling and intense swimming career, that has seen him break pretty much every swimming record ever.

He may want to take a break from competition, to spend more time with his young son, Boomer. The question remains, will he hand up his swimming cap for dance shoes? We really don’t know if he is a great dancer, but we do know he is highly competitive and very likely to put his best foot forward on Dancing with the Stars.

Remember to tune in to ABC’s announcement of the official cast for Season 23 on Good Morning America on Tuesday, August 30. Dancing with the Stars’ Season 23 will premiere on Monday, September 12 at 8 p.m. ET