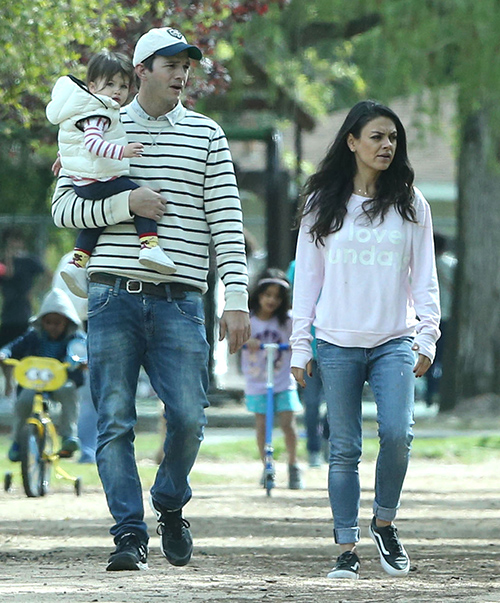 Is Mila Kunis pregnant with baby number two? It is starting to look that way! The internet began buzzing that Ashton Kutcher and his wife Mila had another baby on the way when photos emerged of Mila with what appeared to be a tiny baby bump during a stroll with her hubby and their daughter, Wyatt Isabelle, on March 13 in Studio City.

According to OK! Magazine, Mila and Ashton planned on getting pregnant with a baby brother or sister for Wyatt after Kunis finished up her latest movies, “Bad Moms.” The film is currently in post-production, meaning that Mila’s work is done and now she can focus on baby-making again and will have time for a second pregnancy. The tabloid’s inside source dished, “It’s possible there will be baby news soon.”

Mila Kunis and Ashton Kutcher are by far one of the most private couples in Hollywood. If it weren’t for the fact that they have to leave their home for food and water, we probably would have never known that they had their daughter Wyatt Isabelle. And, seriously, was there a wedding or not? We’ll probably never know for sure.

If Mila Kunis is expecting her second child, there most likely will never be a formal announcement. We’ll be lucky if we ever know when the baby is born. So, at this point, we will just have to remain on baby bump watch and wait and see what happens. Mila and Ashton are definitely pros at keeping their private lives private.

So, do you think that Mila Kunis is really pregnant with baby number two? Will Wyatt Isabell have a little brother or sister in 2016? Or was Mila just a little bloated when she and Ashton stepped out for a walk this week? Let us know what you think in the comments below!

Couple Mila Kunis and Ashton Kutcher take their daughter Wyatt to a park in Studio City, California on March 13, 2016. Wyatt tried her best to walk on her own but ended up getting carried after she fell down.