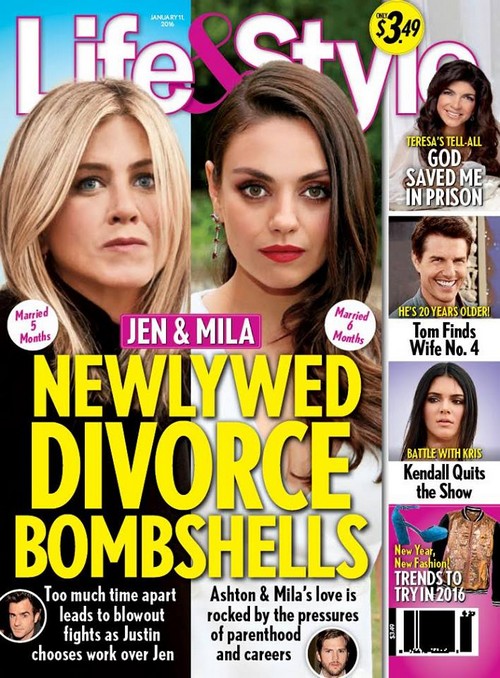 What could Mila Kunis‘ secret heartbreak be? Are Ashton Kutcher and Mila having marriage problems? Years after co-starring on “That 70’s Show,” Mila and Ashton are enjoying married life – and spending time with daughter Wyatt. Or is there trouble in paradise? Sources divulged to Life & Style that Mila is feeling increasingly isolated because the “Black Swan” star has been “home for so long” with 15-month-old Wyatt.

Ashton and Mila can’t find a balance between career and parenthood, according to an insider. Supposedly, there has been “so much tension building” for months that Ashton and Mila have considered calling it quits, insiders told Life & Style.

But is this true? Are Mila and Ashton really having marital problems? A new baby causes stress and sleepless nights for all parents, not just celebrities. Who doesn’t have difficulty balancing career and family when a new baby comes along? Other unconfirmed sources say that the reports claiming Kutcher and Kunis are headed for divorce are simply not true. Are the newlyweds as happy as can be and the marriage stronger than ever?

According to the insiders, Ashton is setting up meetings “many nights of the week.” These sources don’t say what kind of meetings. But what if Ashton Kutcher is doing business at night? Maybe the new dad wants to spend time with his daughter during the day. And nighttime meetings mean more time with Mila Kunis and baby Wyatt, right?

Ever since daughter Wyatt’s birth, the celebrity couple has been dogged by whispers that Mila is pregnant again. As previously reported, insiders have claimed Mila is suffering from postpartum depression. Wyatt is 15 months old and, so far, Kunis shows no signs of being pregnant with baby #2.

Are Mila Kunis and Ashton Kutcher having marital problems? Is the couple headed for divorce? If you check out Ashton’s Facebook page and Twitter account, then you will see the entrepreneur keeps busy with a lot of projects. Maybe that’s what all those night meetings are about.