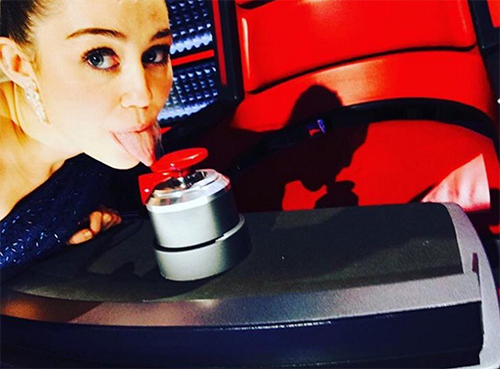 It’s official, Miley Cyrus will be joining The Voice for season 10. The Wrecking Ball singer will be a key advisor for the contestants on The Voice.

In case you had a heart attack, thinking that Miley Cyrus would be taking over a coach’s chair, have no fear. Miley Cyrus will not be doing any such thing. Taking on a smaller role as a key advisor for the contestants, Miley will merely be sharing her experience and wisdom with the up and coming rookies to the music industry.

Miley Cyrus took to social media to make the big announcement with the photo above, which she captioned, “Lickin @xtina buttonz! @NBCTheVoice #keyadviser #season10.”

Today reports that Miley Cyrus will mimic what Taylor Swift did back in 2014 when she advised all four teams. So she won’t be teaming up with just one of the coaches like most advisors usually do.

NBC entertainment president, Paul Telegdy announced in a statement, “When Miley speaks everyone pays attention. Our artists are very lucky to have the benefit of her instincts and wisdom. Our viewers will be treated to an inside look at one of the brightest minds in music and the entertainment industry who is at the forefront of pop culture.”

Miley Cyrus is very good at grabbing everyone’s attention. She is actually a really good choice for the show this season. It will also be a good project for her to focus her energy on and, well, perhaps keep her grounded. She seems to have her feet planted somewhat firmly again on planet earth as of late.

Miley Cyrus is already having a very busy 2016. Getting back together with Liam Hemsworth, flashing that ring, working on The Voice, buying a new house in Mailbu, and even working with the likes of Woody Allen on a new TV series that is still patiently waiting to be named. Do you think that we will be seeing a lot more of Liam Hemsworth in supporting role on Miley’s red carpet appearances this year?

You can check out The Voice Season 10 premiere on Monday, February 29 on NBC! What do you guys think? Will Miley make a good mentor on The Voice Season 10? How about the TV series? Will you be checking out at least one episode to see if it’s any good? Sound off in the comments below and be sure to check back here for all the latest on Miley Cyrus and The Voice!