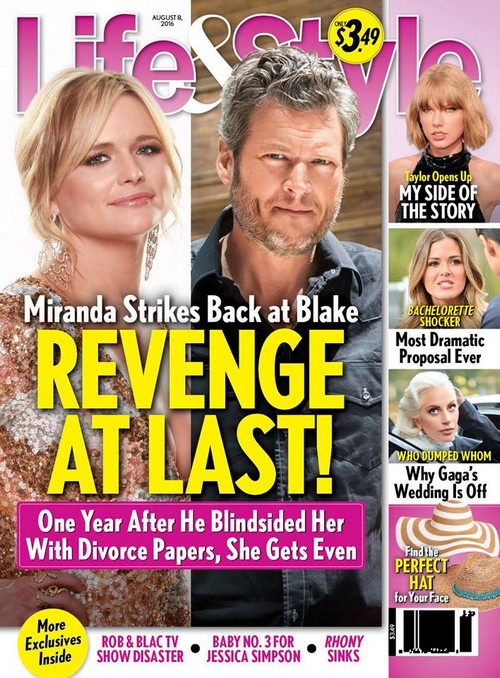 Is Miranda Lambert pregnant with Anderson East’s baby? The country music singer’s fans have been waiting patiently for Miranda Lambert to get revenge on her ex-husband Blake Shelton after he blindsided her with a divorce and began dating his co-star Gwent Stefani, for nearly a year now.

It looks like Miranda may have finally gotten under Blake’s skin though, and one-upped his relationship with Gwen Stefani, according to this week’s edition of Life & Style, Miranda is pregnant!

This week’s cover of Life & Style Magazine features a photo of Miranda Lambert and Blake Shelton side by side, the headline reads, “Miranda Strikes Back At Blake: Revenge At Last!” The bold tabloid cover goes on to tease that “One year after he blindsided her with divorce papers, she gets even.”

What better way to get “even” with your ex? Move on with a younger and hotter version of him (Anderson East), and then get pregnant with his child! An insider dished to Life & Style, “There are whispers that Miranda is pregnant with boyfriend Anderson East’s baby. If she starts a family with another man, it would have to make Blake’s blood boil.”

For years, the media reported that Blake Shelton and Miranda Lambert’s marriage was in trouble because Blake allegedly wanted Miranda to take time off from her career so that they could have children – but Miranda wasn’t having it. Some rumors even tease that the reason Blake finally dumped Lambert was because he wanted kids and was tired of waiting.

The insider added, “His greatest wish was to have a baby with Miranda during their relationship. But now it’s Anderson by her side, and Miranda is thriving like never before.” And of course it is the “Ultimate revenge at last.”

Will Blake Shelton flip his lid if Miranda Lambert announces she is pregnant with Anderson East’s baby? Probably. Did Miranda run out and get pregnant just to “get even.” We doubt it. Regardless, things are definitely going to get interesting in the neverending Gwen – Blake – Miranda saga. What do you guys think, is Miranda Lambert really pregnant? Share your thoughts in the comments below!