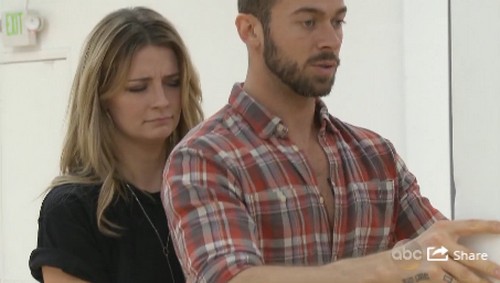 You will never guess who Mischa Barton is dating! Artem Chigvintsev, Mischa’s partner on DWTS 2016 is the lucky fellow! Mischa Barton didn’t exactly win over any fans during her brief stint on Dancing With The Stars Season 22. As a matter of fact, most DWTS fans had a serious problem with Barton’s lack of enthusiasm and negative attitude during the few episodes that she did appear in before she was voted off.

But, Mischa Barton did win over her pro partner Artem Chigvintsev, and they are now reportedly dating!

Dancing With The Stars fans pitied Artem Chigvintsev for being paired up with Mischa Barton in Season 22 – but it turns out Artem apparently enjoyed every minute of it. Yeah, we are totally baffled by this too… According to a new report from ET Online, Mischa Barton and her former DWTS partner Artem have been growing closer since they were voted off Season 22, and this week they went on their first official date!

Artem Chigvintsev and Mischa Barton were spotted out on the town together on Wednesday April 27, Artem took the former “The O.C.” actress out to dinner in Los Angeles to a small and private French restaurant called “The Little Door.” After dinner Mischa and Artem hit up Chateau Marmont for a night cap.

According to ET Online’s inside sources, Artem has been pursuing Mischa since they were introduced on Dancing With The Stars – and she finally agreed to take things to the next level with her former dace partner. An insider dished to Entertainment Tonight, “He is the reason she’s looking happier recently. She has become giddy when talking about him and quite smitten with him.”

So DWTS fans, on a scale of 1-10, how shocked are you by this new couple? Do you think that Artem and Mischa will last? Let us know what you think in the comments below and don’t forget to check CDL for all of your Dancing With The Stars 2016 spoilers and news!