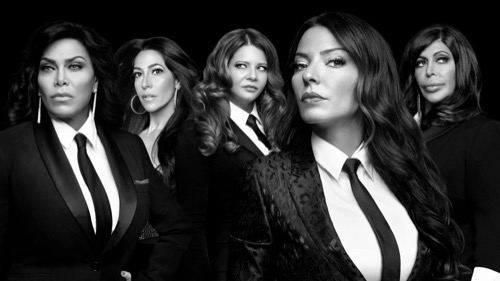 Tonight on VH1 their docu-soap series Mob Wives continues with an all new Wednesday January 13, season 6 episode 2 called “Cabin in the Woods,” and we have your weekly recap below. On tonight’s episode Drita is forced to defend herself after hearing the allegations from the Mermaid Parade.

On the last episode, in the Season 6 premiere, the original Staten Island crew was finally at peace after sending the ladies from Philly packing. Later, a new woman showed up and forces the group to face some difficult decisions. Did you watch the last episode? If you missed it, we have a full and detailed recap right here for you.

On tonight’s episode as per the VH1 synopsis, “Drita is forced to defend herself after hearing the allegations from the Mermaid Parade. Later, Karen and Storm face difficult decisions; and Renee’s friend shakes things up on a girls’ weekend.”

Tonight’s episode is going to be another drama packed one, which you won’t want to miss. So be sure to tune in for our live coverage of VH1′s Mob Wives season 6 episode 2 at 9PM EST! Can’t wait for the new episode? While you wait for our recap, hit the comments and let us know how excited you are about the new episode of Mob Wives tonight.

On the second half of the Mob Wives season premiere Drita and Renee met up to have lunch and catch up. Renee lets Drita know that Love showed up and informed Carla that she was the reason for the fight between her and Carla. Drita gets angry and storms out of the restaurant leaving Renee confused.

Brittany has a conversation with her mother Andrea about what happened at the Mermaid parade and once again her mother tries to dissuade her from moving back to Staten Island.

Karen has lunch with Carla and Renee and discusses her relationship issues with storm. She says that she needs to get away and escape. Carla mentions that she has rented a house in the Hamptons and invites all the girls down for the weekend. Karen asks if she can invite Brittany and Carla says it’s ok, but once again Karen voices her objections about inviting Brittany into the group because of what her mother and father have done. Karen then informs them about her lunch with Drita and Carla calls her fake and says that she has a problem with her.

Renee shows up at her friend Marissa’s photo shoot to see what she is doing. Marissa is dating a man named O.Z. Karen fills Marissa in on the Mermaid parade and Brittany. She invites Marissa to the Hamptons for the weekend, but warns her that Brittany has a mouth on her.

Drita and Angela go shopping at the health food store to accommodate Angela’s new diet and they end up discussing the situation with Carla, Karen, and Renee. Angela lets Drita know that they invited her to go to the Hamptons. Drita tells her to go and calls the girls fake. Angela also asks Drita about the book and Karen tells her that she is moving forward.

Karen goes to see Storm and tries to have a conversation about their relationship but Storm blows her off and tells her that he doesn’t have time to talk to her about it. This makes Karen angry and she decides to end the whole relationship because he can’t make time to listen to her about her feelings.

At Karen’s house Brittany meets up with everyone else as they prepare to leave for the Hamptons for the weekend. Marissa starts complaining about the ride, then she complains about the house itself. The girls decide to go out and have a good time but Renee decides to stay home and sleep.

Angela told them about the issues that Lee was having with Drita’s book and Karen wished her the best of luck because her husband had the same issues. Angela also addressed the issues between Carla a Drita. She also told the girls that Drita called them all phonies which led to Karen deciding that when they get back to Staten Island she was going to call Drita out.
Drita was at home working on her book when Gizelle comes in to keep her company. Gizelle hears a bit of her parent’s story. Drita talks about how her children sustain her through the tough times she goes through.

Back in the Hamptons the girls are hung over after partying so much. Marissa calls Brittany a lush which makes the party very uncomfortable, but Karen backs her up. Once again the girls are discussing the situation with Drita and why she thinks they are fake and phony and Karen declares that she needs to sit down and talk to all of the girls except for her because she “doesn’t care.”

The women go to a wine tasting in the Hamptons at Duck Walk. Marissa keeps sniping about Brittany’s drinking saying that she needs to “take it back a little.” She continues to call her a lush. Brittany calls her a Debbie Downer and says that she complains too much and the fight is on between these two! e fight between her and Carla. Drita gets angry and storms out of the restaurant leaving Renee confused.