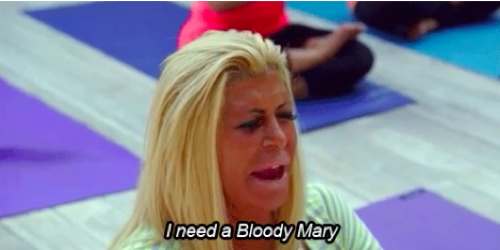 Tonight on VH1 their docu-soap series Mob Wives continues with an all new Wednesday January 20, season 6 episode 3 called “Hamptons Hangover,” and we have your weekly recap below. On tonight’s episode in the ladies from Staten Island try to enjoy their last days in the Hamptons; Drita D’Avanzo forms an alliance with Brittany Fogarty.

On the last episode, Drita was forced to defend herself after hearing the allegations from the Mermaid Parade. Later, Karen and Storm faced difficult decisions; and Renee’s friend shaked things up on a girls’ weekend. Did you watch the last episode? If you missed it, we have a full and detailed recap right here for you.

On tonight’s episode as per the VH1 synopsis, “the ladies from Staten Island try to enjoy their last days in the Hamptons; Drita forms an alliance with Brittany; a paranormal presence prevents AJ from moving back home; and Ang’s past haunts her as she struggles to get her bartending license again.”

Tonight’s episode is going to be another drama packed one, which you won’t want to miss. So be sure to tune in for our live coverage of VH1′s Mob Wives season 6 episode 3 at 8PM EST! While you wait for our recap, hit the comments and let us know how excited you are about the new episode of Mob Wives tonight and what you think of the season so far.

On this weeks episode of Mob wives the party in The Hamptons continues and the ladies wake up after a night of partying to find a yoga instructor at their door. The ladies are not exactly embracing this activity after a long night of drinking and partying.

After the yoga experience the ladies enjoy a lunch prepared by a chef Carla hired. Brittany is still upset by the confrontation that she and Marissa got into and she declares that it is not over. Angela talks about her conviction for distributing narcotics and how it has impacted her life and what she wants to do when she gets home. Karen decides that she wants to confront Drita about her comments calling her fake and phony and let her know how she feels.

Back in New York Renee, AJ and Andrea meet up to have lunch and Renee tries to get her son to commit to being engaged to his long term girlfriend and moving in with her. When she asks them why they won’t move in with her Andrea tells her that she believes the house is haunted and Renee asks them if she has a medium come and check it out and gets the all clear will they move in and they agree.

Karen and Drita meet up and Karen calls Drita out about calling her a fake and a phony. Karen tells Drita that whatever her issue is with her issue and not to put that on her. The two get into a screaming match in the middle of the park. Karen asks Drita why they aren’t fake when they have said horrible things about each other and they decide that they are no longer friends. Karen says that he “doesn’t like Drita’s version of friendship and wants nothing to do with her.”

Brittany and Angela meet up at Brittany’s house to talk and hang out and Drita shows up so Brittany finally gets to meet her. Brittany tells Drita about the argument that she and Marissa had while they were in the Hamptons. Meanwhile Karen was meeting with Marissa to talk. Marissa talks about her first meeting with Drita and how she snubbed her even though their boyfriends were mutual friends. Drita tells Brittany that Renee is the problem in the group and that she is the troublemaker who talks about everyone and who has fought with everyone in the group.

Renee has the medium come out to her house and immediately points out that she has two spirits living in her house. The first is her grandmother and the second is a little girl who is looking out for her. The medium tells her not to fear the dead, but to fear the living.

Angela goes to meet with her lawyer to try and get her constitutional rights back to obtain a liquor license. She tells her lawyer that she has had to close down the bar . The lawyer tells her that the consequences of what she has done will stay with her for the rest of her life. He tells her that the likelihood of getting her federal conviction expunged is “one notch above zero.” Angela is very upset because she doesn’t know any other skill besides working in a bar.

Brittany and Drita meet up at the gym in Brooklyn to work out. Brittany tells her about her experiences of visiting her father in prison as a little girl. Brittany talks about how the families go through the prison sentences just like the inmates. Brittany wants to know about the other women and Drita says that the other women are drama lovers.

Everyone meets up for lunch and Angela informs the women that she won’t be able to have her rights reinstated. Carla tells the women that Drita told her that she was the cause of all the drama. Angela tells Carla that she never stuck up for Drita. Carla hears that a secret that she had told Drita had been revealed to everyone and she gets angry.