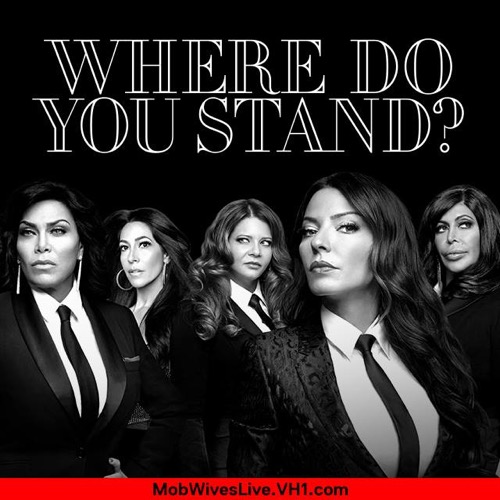 Tonight on VH1 their docu-soap series Mob Wives continues with an all new Wednesday January 27, season 6 episode 4 called “Flip-Floppers and Party Hoppers,” and we have your weekly recap down below. On tonight’s episode Big Ang gives Neil an ultimatum; tensions between Drita D’Avanzo and Carla Facciolo will run high.

On the last episode, the ladies from Staten Island tried to enjoy their last days in the Hamptons; Drita formed an alliance with Brittany; a paranormal presence prevented AJ from moving back home; and Ang’s past haunted her as she struggled to get her bartending license again. Did you watch the last episode? If you missed it, we have a full and detailed recap right here for you.

On tonight’s episode as per the VH1 synopsis, “Ang gives Neil an ultimatum; tensions between Drita and Carla run high; Karen deals with her father’s critics; Marissa shares her opinions about Brittany’s friendship with Drita.”

Tonight’s episode is going to be another drama packed one, which you won’t want to miss and neither do I. So be sure to tune in for our live coverage of VH1′s Mob Wives season 6 episode 4 tonight at 8PM EST! While you wait for our recap, hit the comments and let us know how excited you are about the new episode of Mob Wives tonight, what are you looking forward to most?

Big Ang found herself playing peacemaker on tonight’s episode of “Mob Wives”. Apparently the other ladies within their group have turned on Drita and Ang for one thinks it has gone too far. And has been drawn out too much over something as petty as talking about Carla’s boyfriend.

So Ang met with Drita recently and she told Drita that she was going to be hosting a party for her birthday. And that all of the ladies were going to be invited. But Drita didn’t really want to make peace and especially not at Ang’s party.

Drita had only talked to Ang about Carla’s boyfriend because as friend she had been concerned about Carla and had hoped that Ang would be the one to get through to her. And at least get Carla to acknowledge that that her previous relationships haven’t always been healthy. Yet for Carla to be angry about that – has only angered Drita.

And Drita is truly someone with a temper. She can more understand why Renee would have a problem with her because Drita had told everyone that Renee was the poisonous one in the group. However, Carla had once been a very good friend and so Drita was left feeling like idiot because Carla turned against her so fast.

But Ang also had other things to worry about than Drita’s problems. Ang it seems has a barely there chance at ever owning or running another bar and so she was desperately need of some kind of cash flow. And that’s why she later told Drita that it was time for Neil to finally pay his way.

Neil was Ang’s husband yet he had been mostly keeping his paychecks to himself while she paid for everything else. And that just couldn’t continue anymore. Ang had medical bills that were piling up and therefore she later ended up telling her husband that he had to step up.

Ang told him that the guys she knew would never have let a woman support them. Or for that matter not pay a single bill at their own house. Yet Neil also had a few things to say and he told that all the guys she was talking about were probably in jail. And had also added that if she didn’t try to live so lavishly they wouldn’t be having money problems.

So Neil was left at home on the night Ang celebrated her cancer free fifty-fifth birthday party. Though he wasn’t necessarily missed.

And while the drama between Drita and Carla was the main topic of conversation, it wasn’t the only drama that was going on. Karen had some issues as well. Her boyfriend Storm had blown up at her after the ladies’ dinner last week.

He hadn’t wanted to talk when she was ready to talk, but on the night of the dinner, he had gone over to her house expecting she would be there. And then got angry when she wasn’t. So the two of them got into this huge fight after she got home and he destroyed her phone but she tried to knock him out by cracking something over his friend.

So Renee had told her, following that nasty confrontation, that her relationship with Storm was too toxic as it is. Storm winds Karen up and she does the same to him. Yet what kind of relationship could continue like that.

But Karen hadn’t broken with him by time Ang’s party happened and in fact she wanted to see if their relationship was still salvageable because they did both love each other.

Although, out of everyone that did go to the party, no one had assumed it would be Karen that got into an argument. And that’s because they hadn’t realized just how stress she was. That is until someone mentioned her father.

An old friend of Ang’s had said “your father is a rat” and that had set Karen off. She went to a pretty dark place and was intent on confronting the man. Even going as far to demand that he repeat what he said to her face.

And so for the sake of peace, Ang had asked her friend to go. She said in her confessional that they all knew what Karen’s father did and was. But he shouldn’t have brought up at her party that had been miraculously drama-free until he did.

See, Drita and Carla had their chance to talk and neither chose to be the bigger person by approaching each other. So they never had hashed it out and then later didn’t see a point in starting something after it took a lot of the girls to calm down Karen. And Ang’s party went on to be another one of her successes.

Although, afterwards, both Carla and Marissa had a lot to say about Brittany. Brittany had been against Drita one minute and had quickly befriended her in the next. And so they wanted to know if Brittany was simply a flip flopper or if Drita was easily manipulating her.

So Ang decided to put an end to all of the side conversations and she asked for everyone to attend a sit-down. And I wonder if Drita will mention the part where she’s writing a tell-all book with her “friends” in it.