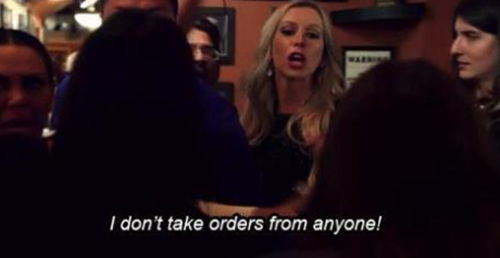 Tonight on VH1 their docu-soap series Mob Wives continues with an all new Wednesday March 9, season 6 finale called “What’s Done is Done,” and we have your weekly recap below. On tonight’s episode the past war between Drita D’Avanzo and Karen Gravano can’t be let go causing them to fight once again.

Mob Wives is an American reality television series on VH1. It follows a group of Staten Island women after their family members are arrested and imprisoned for crimes connected to the Mafia.

On the last episode, Karen tried to end the feud between Brittany, Carla and Renee; Big Ang’s future hanged in the balance; Drita hears a rumor that may destroy her relationship with Karen. Did you watch the last episode? If you missed it, we have a full and detailed recap right here for you.

On tonight’s episode as per the VH1 synopsis, “D’Avanzo and Gravano are in no luck in getting their past war behind and what’s worst is that even their daughters are now ensuing this feud themselves.”

Tonight’s episode is going to be another drama packed one, which you won’t want to miss. So be sure to tune in for our live coverage of VH1′s Mob Wives season 6 finale at 10PM EST! While you wait for our recap, hit the comments and let us know how excited you are about the new episode of Mob Wives tonight. Down below sound off and tell us what you think of Mob Wives season 6 so far!

This week on the series finale of Mob Wives Renee heads to the last night of her ballroom dance lessons and the recital. When she gets there Alex is waiting for her and she asks him “Have you lost your voice?”

Carla, Karen and Marissa show up along with Renee’s son AJ. The ladies ask how she was and AJ tells them she was nervous. When Renee stepped out on the floor to do her Rhumba she was nervous. Karen says that “Renee looks fabulous and having a man twirl her around the dance floor is amazing to see because she always has her walls up.” Carla says “Me and Renee have known each other for twenty years and we have managed to put our differences aside.” Everyone is impressed with Renee’s performance.

Drita heads over to visit Ang. Ang asks her what is going on. She tells Ang about her conversation with Brittany. Ang corrects her and tells her that Marissa never said that Karen was the one who said Karen’s name when it came to the conversation about the men talking. Drita gets really angry and asks “Why is Marissa taking Karen’s blame?” She starts yelling about how she runs Staten Island and says “Marissa just got here and she needs to go back to Arizona where she came from.” Ang tells Drita that she, Karen and Marissa need to have a sit down. Drita agrees and says that she will “expose Marissa to the real Karen and show her who Karen truly is.”

The next day Karen and Karina are out and Karen is going to help her learn to park. Karen says that she “has to put an end to the situation with Drita because my kid goes to school with her kid.” Karen is working on parking with her daughter when she hits something and Karen makes her stop and do it again. She says “The problem with Karina is that she thinks we are friends or roommates instead of mother and daughter.” She also says “As bad as Karina’s practice was I see a light at the end of the tunnel.”

Drita calls Marissa and she goes off on her about whether or not she actually said that Karen made those comments. Marissa seems to be confused and Drita says “People want to play gangster I am gonna play.” Drita continues to yell and scream at Marissa about how she is going to lay into Karen and clear up all of the misconceptions that have been floating around. Marissa seems confused and wonders why she has to be there. Drita tells her “You better be worried about your friend because I am going to lay her out.” Marissa tells Drita that she needs to calm down and Drita hangs up on her.

Drita and Brittany head to the meeting and Drita is really upset and angry. Drita says that “Karen is always hiding behind someone.” Brittany asks “Who is she going to hide behind? Marissa? Marissa can’t do anything.” Karen and Marissa head to the meeting as well.” Karen says “Drita doesn’t fight with her words.I don’t want to physically fight her , but I will if I have to.” Drita says “Tonight they will know who the boss is and it isn’t them.”

Carla, Renee and Ang are waiting at the restaurant and Renee says “This has been building up for a year and when these four women come together they are going to kill each other.” Carla tells them “Maybe they need to have a physical altercation and get it out of their system.”

Drita and Brittany are waiting at the restaurant. Drita is extremely heated. Karen and Marissa arrive. Karen says “You have to know someone really well to know what kind of evil is in their heart and I know Drita really well.” When Karen and Marissa walk into the restaurant Drita immeadiately goes off on Karen and calls her a “rat”. Immediately Brittany and Marissa get into it. Marissa tells her to “meet me in the parking lot.” Once they are separated Drita and Karen get into it physically as well and they have to be separated. Karen tells Drita “Let’s talk because all I have for you or words.” Drita is angry and says “I didn’t know I could get this angry anymore.” Karen continues to yell at her and tells her “Your husband cheats on you and makes a fool out of you.” The crew has to separate them before the fight gets anymore physical.

Two monrhs after that dreadful confrontation Karen has been concentrating on her daughter and her accomplishments. Karen says that she “Hasn’t spoken to Drita since that night of the confrontation.” Karen says that :the core values are to protect those who matter in life.”She takes away certain lessons from the mob including loyalty and respet. Karen says that her crime is “Trusting the wrong people.”

Renee says that “some of the women will be friends for life while others are not because betrayal comes from the inside.” She says that her family is what is most important to her. She says her crime is “Falling in love with a lifestyle made for men.”

Carla says that she “doesn’t want her children growing up in the lifestyle. She is gong to do all she can to make sure that her children are happy and safe. Carla says that her crime is “being loyal to a fault.” Drita is preparing dinner for her family and Lee is finally home from prison. Drita says that Karen is dead to her, but that she and Ang will always be the best of friends. She also talks about how the history between the women is too deep to allow them to ever move on. Drita says her crime is “Staying in love with a professional bank robber.”

Karen meets up with Ang and Ang reveals that she has stage four lung and brain cancer. Ang is worried that she won’t be able to fight this and win. She reveals that she and Neal are no longer together and Karen asks her “Are you going to get a boyfriend?”Ang says she is done with men and plans to focus on her kids and grandkids. Ang says that “Most times in this lifestyle people can get over most things, but this time it’s done.”