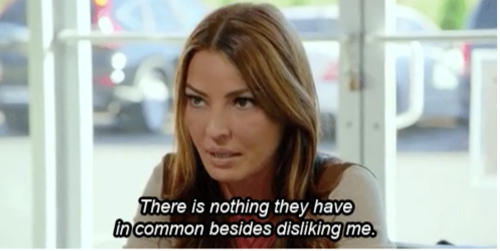 Tonight on VH1 their docu-soap series Mob Wives continues with an all new Wednesday March 2, season 6 episode 9 called “Drittany,” and we have your weekly recap below. On tonight’s episode Karen tries to end the feud between Brittany Fogarty, Carla Facciolo and Renee Graziano; Big Ang’s future hangs in the balance.

On the last episode, the war between Karen and Drita worsened when Brittany relays a rumor; the women tried to cheer up Ang before a surgery; Renee took up a new hobby. Did you watch the last episode? If you missed it, we have a full and detailed recap right here for you.

On tonight’s episode as per the VH1 synopsis, “Karen tries to end the feud between Brittany, Carla and Renee; Big Ang’s future hangs in the balance; Drita hears a rumor that may destroy her relationship with Karen.”

Tonight’s episode is going to be another drama packed one, which you won’t want to miss. So be sure to tune in for our live coverage of VH1′s Mob Wives season 6 episode 9 at 10PM EST! While you wait for our recap, hit the comments and let us know how excited you are about the new episode of Mob Wives tonight. Down below sound off and tell us what you think of Mob Wives season 6 so far!

This week on Mob Wives the women show up at Ang’s house to see her after the surgery on her lung. Carla makes dinner for her, Ang and Karen. Carla asks Ang if she is going to need chemo. Ang tells her that she is not sure. Karen tells the ladies that her father was denied early release. Ang thanks Carla and tells her “Nobody ever cooks for me.”

Drita’s daughter Gizelle is celebrating her 9th birthday and Drita decides to go get her a new puppy despite her and Lee saying they didn’t want any more dogs. Gizelle is so excited to see the new puppy. Drita tells her that “You are going to be fully involved. You have to help buy what he needs and clean up after him.” Gizelle tells her “It’s my birthday.”

Karen and Brittany meet up and Karen tells her that her dad’s petition for early release was denied. Brittany says that she has never had to deal with the scrutiny that Karen has had to deal with. Brittany talks to Karen about Drita. Karen tells her that “The women had made a pact that they would no longer talk about each other on the sly.” Karen says that “Drita should talk to her about whatever she allegedly said about her husband.” Brittany says “I didn’t realize how deep the history ran between you and Drita and I don’t want to be the one to fire the first arrow.” Karen tells her that shot had already been fired. Brittany tells Karen that she is taking her “spoon out of the soup because I don’t want to stir the pot.” Karen tells her that she appreciates it. She then tells Brittany that she needs to sit down and address her issues with Renee and Carla. Brittany says that she doesn’t want to be attacked and that she won’t stand for anyone attacking Drita. The two women continue to talk and eventually Brittany agrees to sit down and try to work things out with Renee and Carla but says “If they attack me or Drita the conversation will be over and the fight will be on.”

Karen goes to the art gallery to meet with the curator about displaying her father’s art work in the gallery. The curator is excited when Karen shows her the artwork. She is very impressed and agrees to do a showcase of Sammy’s work.

Ang goes to the Dr. to find out the results of her lung surgery. Neal is at work so she goes alone. When the Dr. comes in he tells her that she has lung cancer, but that her lymph nodes are not involved. That means that she doesn’t need any follow up treatment. The Dr. tells her that they will be following her closely because there is always a chance that the cancer could come back.

Brittany and Drita meet up to have lunch. Brittany mentions that the last time she saw Drita she was heated about Karen. Brittany tells her that she met with Karen and she told her that “She was done talking about Drita.” Brittany tells her that she is upset with Renee and Carla. She tells her that they are always laughing and cackling. Brittany and Karen go on a tirade about Carla and Renee. Britany says “Carla and Renee are both old enough to be my mother, but I am more mature than them.” Drita agrees and tells her “You will never win with them as long as you are friends with me because they hate me.” Brittany says that she doesn’t care about being friends with them.

Karen invites the ladies to her father’s art display. Everyone is impressed by her father’s work. Ang announces to the group that she is cancer free and the ladies couldn’t be happier for her. Karen’s boyfriend Storm shows up to support her at the show. Karen says “Through all of their ups and downs Storm supports my dreams and he is here supporting my father.” Karen tells them that she didn’t invite Brittany because of her issues with Marissa, Carla and Renee. Carla says that “Brittany says that she stirs the pot. She doesn’t know what she is talking about and needs to keep her mouth closed.” Marissa feels that if Brittany still has an issue with her she needs to come talk to her face to face. Ang has decided not to get involved. Karen says that she wants Brittany to sit down with Carla and Renee and talk about the issues. She tells the ladies that “If Brittany has an issue with people I care about then she needs to address it with them directly.”

The next night Carla, Renee and Karen meet up with Brittany to try and settle the issues they have with each other. Brittany tells them that she didn’t want any negativity at her event. The argument begins to heat up and Ang shows up. Renee tells Brittany that “Ang was the one who called her a flip flopper not them.” Ang admits that she was the one who said it. Once again the argument gets heated and finally Britany says that “You have a problem with me being friends with Drita.” This sets Carla and Renee off and they tell her that “Before you claim to have someone’s back you should really get to know them.” Karen tells her that Renee says “Here we go again. Once more Drita is Gepetto pulling the strings and Brittany is Pinnochio.” The ladies begin to argue heatedly and Brittany tells them “This is who I am and if you don’t like me then forget you.” She then gets up and storms away from the table.

Karen gets angry because Brittany continues to run her mouth and confronts her. Brittany says “I’m done with Karen. As far as I am concerned our friendship is over.” Rene and Carla tell Karen to “Let it go.” Karen wants to confront Brittany some more, but both Carla and Renee calm her down. Renee says to let it go. She also tells Karen “Don’t ever make me have dinner with Brittany again because she is not deserving of my company.”

Brittany and Drita meet up and Brittany tells her about the dinner the night before. Brittany tells Drita all of the things that Karen told her about Lee. Drita gets angry and says that she is “going to break Karen’s jaw.”